For those of you who follow me on Goodreads, you know that I write short reviews of the books I read.  I recently wrote about Glitter and Glue by Kelly Corrigan.  I gave the book 5 stars out of 5 and had this to say:

This book is a memoir that deals with a mother/daughter relationship as told by the daughter who didn’t think – at least in her early 20s – that she and her mother had anything in common, nor did she think they had a basis for relationship.  However, when the daughter runs out of money while traveling overseas and takes a job as a nanny to a family whose wife/mom died of cancer, she finds her mother’s voice constantly speaking inside her head, directing her and leading the way.

I identified with this book 100%.  I had a GREAT mom who LOVED ME the best way she knew how!  The only thing is, I wanted her to love me differently.  In the 15 years since my mom’s death, I learn daily how amazing she was and how ignorant I was.  This book is just one more lesson for me in understanding.  This book gets its title from the mother’s comment that in their family the father was the glitter while she was the glue.  That was true for my life too.  I idolized my dad – Daddy’s home!  Daddy’s home! – while paying little attention to the little woman in the background, Mom, holding us all together with all the drudge work family life contains.

I try to keep my reviews brief on Goodreads so I did not list these great excerpts with which I identified completely:

“If you had asked me, after I graduated from college, whose voice I would hear in my head for the rest of my life, whose voice I would want to hear, I’d have said some combination of my dad and my roommate Tracy’s and Jackson Browne’s.  I would have continued with 10 or 20 or 200 other people before I got to my mom.”

“The thing about mothers, I want to say, is that once the containment ends and one becomes two, you don’t always fit together so neatly.  They don’t get you like you want them to, like you think they should, they could, if only they would pay closer attention.”

“My mother…considers action infinitely superior to analysis.  Button up the kids, tidy the house, get dinner on and off the table by seven, that’s the ticket.  Examine?  Share?  Feel?  [She’d] rather do time at Montgomery County Correctional.”

Fortunately for Kelly Corrigan, she figures out the mother/daughter relationship while her mother is still alive.  She explains things this way, “The only mothers who never embarrass, harass, dismiss, discount, deceive, distort, neglect, baffle, appall, inhibit, incite, insult, or age poorly are dead mothers, perfectly contained in photographs, pressed into two dimensions like a golden autumn leaf.”

Corrigan ultimately thanks her mother this way, “She doesn’t need to hear any of this, but here I am…overflowing with things I want to say, more every day…The trick is, she won’t sit still for a lot of blah-de-blah.  She knows I love her, appreciate her.  She was doing her job, best she knew how, and that’s enough of that.”

I put all of this together to come up with this life lesson from the book: into every mother/daughter relationship a little strife must fall.  But it does nothing to diminish the love.

Had I figured it all out in my mom’s lifetime, she would have been equally unable to hear all the blah-de-blah.  But I think this line from Kelly Corrigan would have touched her heart as it touched mine.  The author says, “I was meant to be her daughter, and I consider it a damn good thing that she, of all people, was the principal agent in my development.” 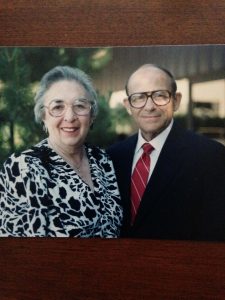 My glue and glitter, Rose and Morrie Kleiner. They are both deceased. The more I look for them, the more I find them inside my heart.