When my son, Scott, was a child, he had major surgery. Though it ripped my heart out to watch the nurses wheel him off to the operating room, I was comforted because he did not go off alone, he went off clutching his beloved friend, Pooh Bear. Pooh went on to star in many family stories through the years and was eventually handed down to Scott’s children. I find it beautiful and amazing that thirty-plus years later, when Scott’s son had to have surgery, the same Pooh Bear kept vigil over my grandson for the three-hour ordeal.

I could regale you with more Pooh Bear stories and I am certain that many readers could likewise tell tales, but that’s my point. Lots of us have a warm spot in our hearts for Winnie the Pooh. Feeling as I do, it was a given that I would see the new movie, Goodbye Christopher Robin, which is the story of Alan Alexander Milne and how he came to write this book. By the way, it was first published in 1926, has been translated into 50 languages (including Latin), and has sold more than 20 million copies worldwide.

Here are the main plot points from the movie:

There are two main lessons in this story, one heartbreaking and one hopeful. The first is that even “good” life events – like huge literary success – can bring unexpected, unintended, and painful consequences. And the second is that time heals a lot of wounds.

I was so intrigued by this movie that I came home and fact-checked it. Thus, I read an article in History VS Hollywood that says Christopher Robin Milne really did use some of the proceeds from the classic book. He dipped into these funds to improve the life of his severely disabled daughter, Clare.

I was happy to read this. It means that Christopher Robin and Clare, in their own way, clutched Winnie the Pooh through tough times, just like my son and grandson did.  That’s a much happier ending…and I like happy endings. 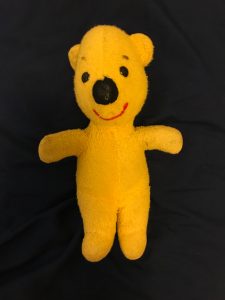