Recently I visited Yellowstone National Park. Among other things, I learned about the HUGE system of fires that took place in the park nearly 30 years ago in July through September 1988. These fires affected 793,880 of the park’s 2.2 million acres – a whopping 36%. In spite of this, our tour guide ended his fire story with these words, “Don’t you just love a happy ending?” Say what?! A happy ending to such a devastating loss? How is that possible? And what lesson does that teach us for our own lives?

Here are some facts about the fires according to the National Park Service website:

Where is the good news in all of this? It is in the knowledge that Yellowstone National Park’s forests are dominated by the Lodgepole Pine, a slender tree that gets its name from the Native Americans who used it to make lodges and teepees. This tree reproduces by creating a cone that is filled with seeds and sealed by a waxy resin. It is interesting to note that the resin will only soften enough for the cone to release its seeds if it is exposed to temperatures of 113 degrees or more. In other words, nature intended for fire to be a part of the life cycle of this pine tree.

Further research finds that at the time of the fire, one-third of Yellowstone’s forests were more than 250 years old, and at a very flammable stage. Catastrophe was waiting to overtake it…as was rebirth. The Yellowstone Park I saw was green and gorgeous. It was full of life. It was a very happy ending to the fire of 1988.

As I listened to this story from our guide I thought of all the people on the tour bus with their own band of “forest fire” in life, be it a sudden death in the family, a divorce, a financial reversal, etc. and I had the idea of writing a novel composed of all those stories. After telling all the tales I would put the characters on a tour bus together. I would give them the joy inherent in a fabulous vacation to Yellowstone National Park. And as a parting gift I would have the tour guide teach the lesson of the fires of 1988: nature takes with one hand and gives back with the other. And given enough time, life can be breathtakingly beautiful once again.

Want to know more: Here are some links to check out: 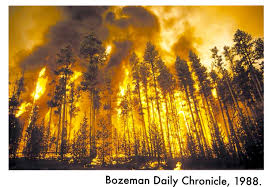