I recently saw the movie, Maudie. It is about a disabled woman in Nova Scotia. Her name is Maud Dowley Lewis and she is bent and crippled from juvenile rheumatoid arthritis. After the death of her parents when she was in her early thirties, she is mistreated by a brother and aunt and ultimately strikes out on her own, literally limping away from the family home. She finds a job as a housekeeper for a bitter curmudgeon, Everett Lewis. His past story as an orphan and then a war veteran completely explain his gruff demeanor. Since she has no place to live – and would find it impossible to hobble back and forth between work and home if she had one – she negotiates not only the job, but room and board in his tiny one-bedroom home. You guessed it, marriage follows but not in any romantic love story way. Instead, this relationship involved abuse, that is, before it found its own unique path.

The story took place in the late 1930s and Everett barely eked out a living by selling fish door to door. Meanwhile, Maud tended to the home and indulged her passion, painting, though there were two huge obstacles to her artistic expression. First and foremost was her physical disability. She gripped a paint brush in one hand but did not have the mobility to move that hand and arm on its own. She had to use the other hand to lift the immobile hand and arm, and in this manner, she moved the paintbrush around on the canvas. Speaking of canvases, though, that was the other major obstacle. Poverty ensured there were few art supplies available to her.

Still, she painted everything in sight. She painted the tea pot and the bread box and the stove. She painted the risers of all the steps leading up to the sleeping loft. She added flowers, stems, and leaves to the house’s commercial wallpaper, and covered all the doors with her designs. Whatever plain surface she found, she decorated.

Eventually she began to paint Christmas cards. When she accompanied her husband on his daily fish-peddling rounds, she sold them to his customers. The twenty-five cents she got for each card supplemented their income and bought her more supplies. Oh, happy day! This allowed her to paint more!

From here, one thing led to another:

Why did I LOVE this movie? Because of its great life lesson. Lots of people who do motivational work teach this recipe for happiness: FOLLOW YOUR PASSION! But what the heck does that mean? This movie explains the concept vividly – find what you love to do and then do it, no matter what obstacles stand in your way.

Here is the twist to the story that makes it even sweeter. Perhaps you knew – I didn’t – but in a note on the screen at the end of the movie, I learned that Maud Lewis is NOT a fictional character. She lived from 1903-1970. Better still, when both she and Everett died, their entire home was moved to the Art Gallery of Nova Scotia in Halifax where it is a part of the permanent Maud Lewis exhibit.

Now that my friends, is what “following your passion” looks like and where it can lead! 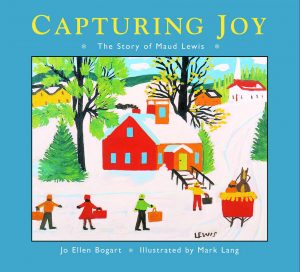 If you want to know more about the artist, here is a book to read. It’s available on Amazon.