6:00 AM EST: The weather forecast throughout the Midwest is precarious today with thunderstorms expected everywhere. Since I am scheduled to fly from Indianapolis to Chicago and on to Denver I am concerned. Here in Indy, we have a 40% chance of storms. I try to feel confident with these odds.

8:00 AM EST: As I finish my packing a sudden thought jolts me – it’s not Indy’s weather that’s important, but Chicago’s as I will need to fly into and out of that city. Via TV I learn that things are especially bad there with a 2 ½ hour delay the average at O’Hare. Flight schedules and connections being what they are, I figure that I am already late for the reception I must attend tonight at 6:00 MDT. This is an odd thing to think with eleven hours still to go.

9:45 AM EST: As I leave for the airport I don my raincoat and best Zen-like attitude. Students of Zen would say “you can’t push the river” and the same is true of planes. Since I am unable to influence the weather or the judgment calls of air traffic controllers, I choose to control my blood pressure instead. So I breathe in and out meditatively as I count my blessings. The first one is that it is not an impending birth or death awaiting me in Denver but a four-day business conference. Though missing the opening reception will be disappointing it is certainly not heartbreaking. The second bit of good news is that the Indianapolis airport has my favorite pretzel shop, coffee shop, and ice cream parlor. With a personal philosophy that says, “when in doubt, eat”, I can happily while away the hours I may have to spend there. And the ultimate blessing is the basic law of air travel, which states that I will eventually reach my destination though numerous reroutings and delays may be required. While such changes sound quite annoying, I chuckle to think how happy I’d be if all my career and relationship goals were equally guaranteed.

2:40 PM EST: I’m in a plane, on a runway, waiting to take off. It’s three hours past my originally scheduled departure time and I’m on a different airline headed to a different town. Chicago’s weather is horrific but there is hope that I can connect to Denver via Minneapolis. The man getting rerouted ahead of me jumped up and down and screamed. As far as I could tell, this did not affect the weather in Chicago. I am pleased to report that I remained calm. This, of course, was with the help of coconut almond fudge ice cream.

5:00 PM CDT: I am a success as an air traveler but a failure as a person with “Zen-mind”. Translation: I made my connection in Minneapolis and am now in the air on the last leg of my trip but I lost all my serenity in the eight or nine minutes I spent in Minnesota cursing as I ran at top speed from one terminal to the next to make my flight. I promise to “follow my breath” meditatively once again as soon as free-breathing is restored to my lungs.

6:15 PM MDT: I’ve collected myself, my luggage and a shuttle ticket to the hotel and conference center in downtown Denver twenty-five miles away. The reception I hoped to attend is already in full swing and continues until 7:30. Can I possibly arrive by then?

10:00 PM MDT: It feels like a miracle but I actually caught the last few minutes of our soiree and then shmoozed with stragglers and went to dinner with a person I’d hoped to have time with. Of course none of this came off the way I had intended. Instead of my new suit, I wore my funky little travel dress and my breath and body smelled of a day full of stresses. However, though my hair was a frizzy mess, I was not the least bit frazzled. I’d like to chalk this up to my Zen mindset or to the fact that I took time to taste the ice cream along the way, but the reality is that I shared the airport shuttle with six attractive men from Canada who were on their way to a geology convention and that a little bit of flirting goes a long way to restore the spirit. I’m thankful for this and other bits of help today, thankful for being in Denver. Amen.

A note to my readers: On March 24, 2018 I was scheduled to fly from Cincinnati to New York for a wedding. A fluke snow storm was expected in Ohio that could include 12 inches of snow! (At the end of March!) As I tried to keep calm, I re-read this article that I wrote in June, 2001. Long story short, the snow storm failed to arrive, the plane flew as scheduled, and all travelers lived happily ever after. 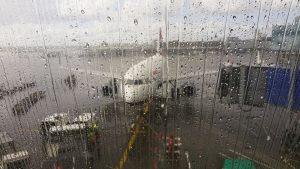