My daughters are unhappy about my single status and are often after me to find a new boyfriend. I tell them it’s a very rare moment that I think I need one, but I will confess that on Sunday, April 29th, at 1 o’clock in the morning, I was at that very rare moment. I needed help!

I went from a sound sleep to being bolt upright in bed! What the heck was that?!

I figured out pretty quickly that it was the carbon monoxide monitor in my bedroom and unplugged it, only to have my blood pressure spike again when it went off a minute later – doot doot doot doot doot! Thus, I learned about its backup batteries, which I removed though that was not as easy as it sounds. At any rate, I stopped the noise, but I had to wonder, what does that doot doot doot doot doot mean?

The handyman who installed the monitor also put one in the unfinished portion of my basement. Not having to worry about aesthetics there, he tucked the instruction manual behind the device so it was readily at hand. The explanation to doot doot doot doot doot was just one floor away, the only problem being that I am afraid of basements at night.

Lights ablaze, I went halfway down the stairs and had a listen. Was that second monitor – in close proximity to the gas water heater and gas heater – likewise blaring every minute? No, it was not! Whew! Good sign! Or maybe not…perhaps it was not sounding due to a malfunction of the unit?

I really needed to go down into the basement, get the instruction sheet, and read it! Or maybe not…perhaps I could just turn off the heat and open the windows. Or maybe I could sleep in the car in the garage. Would carbon monoxide seep out there from the house? I checked the Accuweather app on my phone to see about the feasibility of these plans. Can you believe it, Accuweather had an orange banner across the top with an exclamation point – Frost Advisory! It was 38 degrees out there. On April 29th. In the Midwest. Unbelievable!

So I went all the way down the steps into the darn basement and retrieved the darn instruction manual. It is a 15” X 19” sheet of paper, all small print. Argh! Ultimately, I found the section that said, “What you hear under different conditions.” Here’s the scoop:

It was settling and unsettling to have this information. Doot, doot, doot, doot, doot. Five chirps. This was the detector’s “end of life signal.” It needed to be replaced. But did they really have to use this terminology when their alarm made me fear that maybe I was at the end of mine?

Disaster averted, I went back upstairs to my bedroom, turned off the light, and started to get back into bed but thought better of it. Instead, I found myself changing from my old nightgown into my new nightgown just in case I had figured things out incorrectly. That old nightgown? I wouldn’t want to be caught dead in it.

The ridiculousness of this notion got me laughing as did the thought that my last boyfriend, Big Irv, would have pulled the plug – and batteries – on the detector, said a few colorful words, and gone back to bed without checking any further, so sure would he have been that all was well. Uncertain about our safety, this would have left me angry with him instead of the detector and equally unable to sleep.

Is there a moral to this story? I see three: 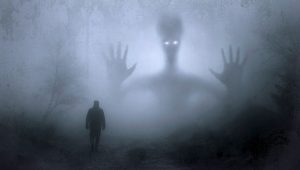