Thou shalt not “should” upon thyself. These are wise words that I would love to live by, but gosh, there are just so many “shoulds” in life. One area that is fraught with them is travel. I always feel like I should see all the major sights wherever it is that I am traveling.

I have a friend who told me that she was once in Rome for a conference and instead of sight-seeing in her free time, she sat in her hotel room and read a novel. While I love that this is a permission slip to NOT feel the tyranny of the shoulds, I wonder if it isn’t a bit ridiculous?

This summer my son-in-law, Scotty B., had a work opportunity in Ireland and so he and my daughter, Shana, and their three daughters left the US for the UK. Shana’s goal was to travel a lot while Scotty worked and invited me to join her and the girls for a week in London. Grateful that I was invited and grateful that such a trip is possible for me, I jumped at the chance. 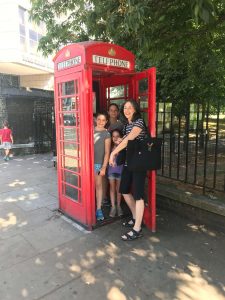 Immediately, friends began to tell us all the places we should see. The list is long, and notice that etcetera is at the end of each category: 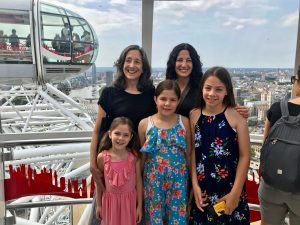 At the London Eye

I am grateful that Shana took the lead in planning the itinerary. Since she was in Ireland as we worked on it, the logistics of talking to each other were difficult so we did not have the luxury of weighing choices endlessly. She chose a couple of sights to see each day, the restaurants at which we would eat, and stand-by sights for each day in case time permitted. Together we made advanced reservations wherever possible. The end result is that we saw a lot, though it was a thimble-full of all the many things there were to see.

While I still ache over previous trips where I did not see “everything,” such as missing the Shoes on the Danube Bank Holocaust memorial in Budapest, I feel no regrets about this London trip. While I missed all those museums – the Natural History, the British, the Science, the Victoria & Albert – I saw some truly amazing things. Here are five of them: 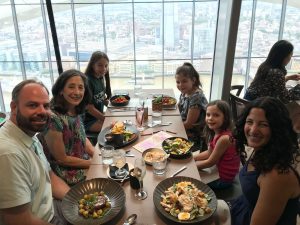 At the Sky Garden

On our last night in London, as we lamented having to leave, my granddaughter exclaimed, “There’s still so much to see or we could just have fun in the hotel room!” And there you have it, the shoulds of travel reduced to its core element, doing what makes you happy! Such wisdom from a ten-year-old.