The Fitbit is a device that is worn on the wrist and used to track activity. At its most basic level, it counts the number of steps a person takes daily. The first Fitbit came on the market in 2007 and sometime after that, I inherited one from my son who had tired of using his. Since many of his friends at work had a Fitbit, he was linked to – and in competition with – all of them through his device. When I inherited the device, I inherited the friends and the competition. Some guy named “Norm,” was always in the lead. From the get go, I wanted to beat Norm! Whenever he walked a little bit more, I walked a little bit more. I was thrilled with the extra exercise this gave me.

I should confess that walking is nothing new for me. I have walked an hour a day, five days a week, since the mid 1980s. While I enjoyed having this device to quantify my effectiveness, over a couple years’ time some negatives outweighed that benefit:

It was at that point that the funky latch on the Fitbit failed me and the device fell off my arm while I was out shopping. When I got home without it, “good riddance!” was my first thought since I don’t need a device to make me feel dumb or to make me doubt my sleeping prowess. But then more years passed and though I continued my daily walks, I found myself a little lethargic and depressed. I wondered if the main perk of the Fitbit – the impetus for extra exercise – could remedy that situation.

I brought the topic up with my friends, Vera and Bill. Vera immediately enlisted Bill’s help to research the right activity tracker for me. I stressed that it had to have a built-in watch and that it needed a traditional watch strap. And before I could say that the device absolutely could NOT monitor my sleep, I had the epiphany that I could just take it off at night! Huh! This new device was actually proving my intelligence!

Bill took no time in choosing the Fitbit Blaze for me. Plus, he found a much-discounted price on QVC, a company I had never used. I ordered it and received it and though intimidated by this new electronic device, was able to set it up using the directions in the box plus one YouTube video. A thing that I LOVE about the new device is that between the hours of 8 AM and 7 PM, it wants me to walk at least 250 steps per hour and if I have not accomplished this goal by ten minutes before the hour, it vibrates to remind me to get up and go! It’s great, just like when I competed with Norm. In this manner 3000 steps a day are easily mine.

It’s crazy to say it, but this whole Fitbit experience has taught me several life lessons. Here they are now: 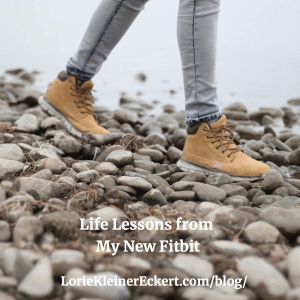