On November 26, 2018, Newsweek.com printed a list of “The Best Christmas Movies of All Time.” To create their ranking, they combined data from Rotten Tomatoes, Metacritic, and user reviews on IMDb. On the list, at position #33 out of 50, was Love Actually, one of my favorite movies at any time of the year. Written and directed by Richard Curtis, the film opens with airport scenes, actually shot at Heathrow, in which we watch scads of people joyously reunite with loved ones. This montage is breath-takingly moving, as are the words spoken by the narrator, Hugh Grant. He says that when he becomes gloomy about the state of the world, he thinks of the arrival gate at Heathrow to remind himself that if you look for it, you’ll see that love actually is all around.

This movie has a large ensemble cast. They work together to remind us that love comes in many forms, romantic and beyond. I’ve chosen a handful of storylines to show this and when possible, I’ve included links to fabulous cinematic moments.

You know him from: Bridget Jones’ Diary, Notting Hill, and Four Weddings and a Funeral

In this movie: He is the newly elected – and single – Prime Minister of England who falls in love with a member of his household staff. With this budding new relationship, he becomes a fool for love, giving us all permission to follow suit.

His most joyous scene: He is prim and proper during his first day at 10 Downing Street, but by nightfall he breaks free of that staid image in a solo dance scene that always makes me dance along and laugh: https://www.youtube.com/watch?v=zcgxBHBsl-4.

You know her from: The Pirates of the Caribbean (series), The Imitation Game, and Collette

In this movie: She is Juliet, and she is unwittingly part of a love triangle. She marries Peter (Chiwetel Ejiofor) without knowing that his best friend Mark (Andrew Lincoln) is in love with her. In a beautiful resolution to the situation, we are reminded that honesty is the best policy.

This trio’s most joyous scene: Even though he is in a ticklish position, Mark proves himself a true friend by providing a musical surprise at Juliet and Peter’s wedding. I laugh and cry when the trumpets start to play: https://www.youtube.com/watch?v=m_2q1rclwNE

You know her from: Ozark (TV series), Sully, and The Savages

In this movie: She plays Sarah, a woman who is starving for romantic love but who is too busy caring for her mentally ill sibling to find it. She’s had a crush on Karl for years and when they finally get together, their magic moment is interrupted by a call from her brother. Her roles as constant caregiver and spontaneous lover do not overlap well, which is great validation for others in dual roles that are sticky.

Her most joyous scene: Karl drives Sarah home from a holiday party and sees her to the door where things immediately percolate. She excuses herself for a moment, goes around a corner, and screams with joy – silently! This gif from the film always reminds me of my own moments of jump-up-and-down happiness: https://gph.is/1Q0y9Ma

You know him from: Schindler’s List, Taken (series), and Les Misérables (1998 version)

In this movie: He is a new widower who is learning to deal with the pre-adolescent stepson he is raising. Beyond the love inherent in this parenting situation, the son is experiencing his first crush and seeks advice from his stepdad.

His most joyous scene: No clip available, but Liam Neeson’s expression is priceless when he quickly wipes the laughter from his face and becomes serious talking to his son about the crush even as he thinks, “Aren’t you a little young to be in love?” It’s a great example for all of us who try to support our friends even when we think they are crazy.

You know him from: The Best Exotic Marigold Hotel (movies), Johnny Worricker Trilogy (TV series), and The Girl in the Café

In this movie: He is Billy Mack, an aging rock star looking for a comeback. When he gets it, he goes off to celebrate at a Christmas Eve party hosted by Elton John. He soon changes course, choosing to spend the evening with Joe, his manager of thirty years, because he realizes that after all their time together, they are best friends.

His most joyous scene: Every scene with Bill Nighy is adorable. This one is a montage of the entire movie with him singing his comeback song throughout. He appears in the images too and in the last ten seconds of the clip he gives half-a-wink that thrills me: https://www.youtube.com/watch?v=5Fmf3D9oNn4

The movie ends at Heathrow a month after Christmas. Many of the main characters are there, reuniting with loved ones after being away on holiday. In this manner, we get an update on their storylines. But better still, when those fictional greetings are done, the director segues to the real reunions that so poignantly opened the film. First one fills the screen, then four, then nine, then twenty. Then there are too many to count. The screen is a mosaic of the myriad forms of love, not just for fictional characters, not just for Big Stars, but for everyone. 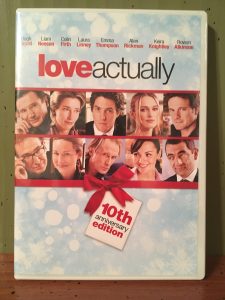