In December my twelve-year-old granddaughter and I traveled to Israel. We were part of a program called G2. Its goal was to bond the two G’s – grandparents and grandchildren – with each other. The Jewish Agency for Israel worked with partner agencies in the United States (in Cincinnati, the Jewish Federation) to create the experience. G2 couples from New Jersey, Miami, and Cincinnati formed the first cohort of this amazing pilot program. With staff members and so forth about three dozen of us traveled together.

Since Israel’s history is rich, you can be sure we saw a lot. Here are some highlights:

While I could list a dozen more bullet points, my most favorite sights had little to do with Israel and everything to do with Tillie. “Proud” is not a grand enough word to explain how I feel.

I have to confess that before the Israel trip I was trying to bolster my courage as I worried about various things that might be thrown my way. (Read my blog here.) One thing I did not anticipate, however, were the strong emotions I would feel in this Jewish homeland. Nor did I have a game plan for handling them so as not to embarrass Tillie. In suck-it-up-buttercup mode, I held in my feelings as much as possible when:

These strong emotions surprised me. I had been in Israel once before, in 2007, and did not feel this way. But of course, that was before Charlottesville and Pittsburgh. That was before I was forced to consider how rampant anti-Semitism is in the United States. While I have always felt that Israel is the ace up my sleeve in case Hitler II ever rises to power, and while I have always felt that Israel is a homeland for Jews, it was some generic Jew I was thinking about in the past. Now it’s more personal.

When I embarked on this G2 adventure, I hoped I would form a greater bond with Tillie and I did! What a great bonus it is to also bond with my broader family, the people of Israel! What an amazing trip! 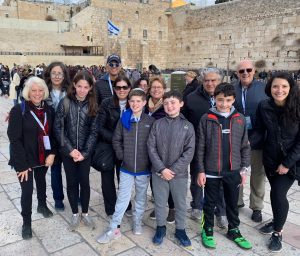