“If your heart stops, do you want us to resuscitate you?” Being asked this question at 2:30 AM as nurses got me settled into my newly acquired hospital room was one of the most disconcerting things that happened to me last weekend. Even four-and-a-half hours in the emergency room with symptoms that were suggestive of stroke or heart attack did not rattle me as much as that question. Here I was, thinking my symptoms were a fluke that would resolve themselves by morning, when this question took me someplace else instead. My answer was swift and emphatic: “Yes! I’m only sixty-seven years old! Resuscitate me!”

Emergency room vigils are all too familiar to me, having presided over my dad’s health before his death in 2010. He once had six ER visits in four weeks! One of the oddest things about last weekend’s experience was to realize that I was the care receiver instead of the caregiver. All three of my children plus my son’s significant other watched over me in the ER, making perfectly clear to us what I missed back there in 2010: I am no longer a member of the sandwich generation, I am now a slice of bread. When a hospital admission finally took place, they were the ones who got to go home, wondering and worrying about what tomorrow would bring, hoping, of course, that I wouldn’t be toast. (Sorry, I couldn’t resist. I must be feeling better? Right?)

As my hospital journey continued through Saturday with a whole day of tests and waiting for test results, my daughters kept me company, chatting away at the foot of my bed and setting off memories of the good old days when I was the visitor instead of the visit-ee. Thus I recalled the late September day I spent with Dad at the skilled nursing facility where he lived. Since it was a sunny, warm day I took him outdoors in a wheelchair. In his inimitable style, he was asleep immediately. Before long, two women entered our courtyard area pushing an elderly woman on a rolling bed. They parked the bed and positioned themselves on either side of her. As they conducted a conversation across her soon-to-be-sleeping body, I had no choice but to listen in. Thus I learned that I was in the presence of a mother and her two daughters. One of the sisters lived nearby and the other was visiting from far away. Love flowed as they had a delightful time catching up with each other and sharing family news. I was moved to think that one day my daughters and I would be the characters in a similar play, I just didn’t imagine it happening at age sixty-seven.

I can say with all honesty that it was nice to see my daughters at the foot of my bed making jokes with each other and with me, but if I have a vote in the matter, next time I want to enjoy togetherness at one of the grandkids’ dance recitals, band concerts, or choral concerts. (Are you listening, God?)

Ultimately, I was discharged. After a conversation about whose house I would go to, I made sure my house won. My daughters drove me there, fed me dinner, and tucked me in for the night. Then, with great trepidation, they left. I knew how they felt because this was an exact replay of the time I brought Dad home from the hospital when he was still in an independent living facility. As I pulled his apartment door closed, I stood in the hallway and wondered how he could possibly be safe on his own, but then again, I didn’t have a Plan B.

Beyond knowing what my daughters were thinking, I now had Dad’s mindset as well. He was terrified of all the what-ifs running through his head. I hope he knew to sleep with the lights on because ghosts and goblins only appear in the dark.

When Dad was in independent living, my kids and I thought it was ever so cute that every morning he had to hang a smiley face sign out on his door handle to let the staff know he was alive and well. Such a desire to know is now ours. Thus, I am the proud owner of the newest Apple Watch that has an SOS system built in. It is automatically set to call 911 in an emergency plus it will notify each of my kids via text.

Being nine days in to this medical odyssey, we still have no diagnosis though many dreadful things have been ruled out. I am able to resume my normal life, albeit with a dash of apprehension. It is my hope that ultimately the purchase of the Apple Watch will prove to have been (you’ll love my word choice) overkill. But I have the watch now. And it’s lovely! It’s so stylish! And so befitting a sixty-seven-year-old woman who still has a lot of living to do! 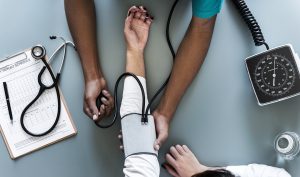