My house is built on a man-made lake. Every window on the back has a view of the water. While beautiful in itself, the most stunning thing about the lake is that the morning sun bounces off it, sending ripples of light through my mini blinds and onto my ceiling. I like to think of this as God dancing there.

This thought came to me during the first days of living in the house. I was a soon-to-be-divorced woman who was in many ways scared to death of the future. As I lay in bed on one of those mornings, three bands of light from the three windows in the room danced away. As I puzzled over what they were trying to tell me, these words popped into my head: You are not alone. I am with you. Fear not.

I was so comforted by those words that I captured them in my artwork. I make quilts with words and symbols pieced into the design. As I made this quilt I chose to depict God as a tree in fall coloration as opposed to sunlight on water. 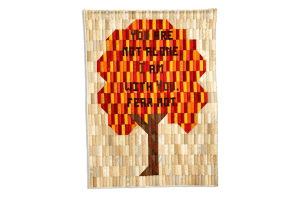 I have lived in the house over twenty years now and of course I have become very comfortable with my life, divorce included. But a residue of that time sticks with me, namely the thought process – perhaps belief – that God dances on my ceiling each sunny morning.

I never thought I was teaching anyone anything, but as I started to have grandchildren and they started to visit my house, I showed them my ceiling. Though my three children were raised in the Jewish faith, my grandchildren are being raised in various manners of believing in God – or not. Hence it was interesting to hear from one of the little kids that he believes in God…when he’s at my house. Perhaps because of the very tangible dance routine we see?

Lucky gal that I am, all my kids and grandkids live within a five-mile radius of my house. Our Monday routine is that any child who is not in school full time – or who has a day off from school – comes to my house for a nursery-school-like day that we call Marmel School, “Marmel” being my grandma name. As the parents bring the kids over for the day, they often come in and have coffee. Thus it was that my son, a former school teacher, was with his kids one morning at my house. As the light show began on the ceiling, he took the opportunity to do a science lesson, “Do you know why that light is sparkling on the ceiling?” he asked. The kids shouted in unison, “It’s God dancing on the ceiling!” The science lesson ended there.

Through the years of Marmel School the little kids have delighted in this phenomenon. Sometimes the light show is more dramatic than other times and the kids excitedly shout to come into this room or that to see God. One day, the light show was rather lethargic and we had to search from room to room to find God. But there He/She was, finally, in a little area on my bedroom wall. My grandson was four-years-old at the time and he said, “Look, Marmel, God’s a transformer! He’s on the wall instead of the ceiling!”

Recently I had a scary health “episode” which caused me to spend hours in the emergency room followed by a night in the hospital. When I was released and came home, I was not at all confident about my health, or more to the point, what length of days I would have. As I woke up that first morning at home I was actively aware – and grateful – that I had woken up, and as I lay there saying a little prayer of thanks, I noticed God up there on my ceiling. “Oh wow,” I thought, “my old friend’s here to comfort me.”

It’s now a couple weeks post hospitalization. And life goes on, thank God. Thus, a much-needed repair to my home is in progress – I am getting new windows. It was only as the installers ripped the old windows out on the back of the house that I started to worry about how this might impact…well, God in my life. Truth be told, I have never understood the science behind the phenomenon and the lesson my son tried to give was thwarted by divine intervention. So, would new windows change things? They are treated so UV rays don’t get in, but is God likewise blocked? This question plagued me through several rainy mornings. But finally, there was a sunny day, and proof positive that God was still with me! Whew!

I know some will scoff at this story, telling me that the concept of God is just a crutch for those not strong enough to face the world alone. In part, I agree with them. That is exactly what I have confessed to here, especially on those days when my spirit is limping. But let’s not forget the wise words of my grandson: God is a transformer. So on other days, the majority of days, those days when my spirit is dancing, God is light and delight. In both cases, I am grateful.

Want to read more of my writing? Try this: Love, Loss, and Moving On!