My granddaughter can sing every word to every song in the musical, Hamilton. Since every line in the play is set to music, this means she knows every word in the play. When I hear her perform one of the numbers I always hope that Lin-Manuel Miranda, the play’s creator, transmitted history correctly because for lots of teens and tweens like my granddaughter, his version of history is the default setting for their understanding of the Revolutionary War. Pity the American History teacher who tries to tell the tale differently.

With this blog I am using Lin-Manuel Miranda’s take on history too. As I tell you what he has to say about Alexander Hamilton, I am going to bring Bill Clinton into the picture. How do their stories coincide? Both men had extra-marital affairs that impacted their careers. The question I ask is this: Is honesty the best policy when it comes to fessing up – or not – about such a dalliance?

Before I go on, if you are not familiar with the musical, treat yourself to this YouTube video in which LMM first introduces Alexander Hamilton’s story at a White House event in 2009, some six years before it opened on Broadway. I dare you not to be intrigued and/or electrified by it: https://bit.ly/1mXGVcu

Ok, then, here is Lin-Manuel Miranda’s version of Alexander Hamilton: Famously, he is a “bastard, orphan, son of a whore” who accomplishes a lot in large part because he is a gifted and prolific writer. In his lifetime, he “put a pencil to his temple, connected it to his brain, and wrote” the following:

It is at this point in his career that Hamilton’s legacy is threatened when he is accused of financial impropriety for payments he made to James Reynolds. The innuendo is embezzlement of government funds. The reality is blackmail. Being a prolific writer, Hamilton decides to write his way out of the problem, creating the “Reynolds Pamphlet,” which Wikipedia says is 95 pages long. In it, Hamilton admits to having an affair with Reynolds’ wife and proves that all payments to Reynolds were intended as hush money and that all of the money came from Hamilton’s personal funds. Whew! Hamilton is cleared of embezzlement charges…but is now guilty of having an affair.

A song called “The Reynolds Pamphlet” is performed at this time. Within the lyrics I count eighteen times (18!) that some version of these words is sung: “He’s never gon’ be president now.” Every time I listen to the CD, Bill Clinton rears his handsome head to me during this number. As I see it, Hamilton is 100% honest. He admits every aspect of his misdeed…and loses his political career over it. Meanwhile, in similar circumstances, Clinton is not 100% honest. He denies every aspect of his misdeed for months…and is still allowed to finish out his presidency. These stories side-by-side obliterate the concept of honesty being the best policy, which troubles me every time I listen to the CD.

I always felt that Clinton should have told the truth from the get-go. He was a very charismatic and popular president and people would have continued to support him in spite of an affair. It was, after all, something that happened between Bill, Hillary, and Monica and was none of America’s business. Especially if he told the truth about it. As for Hamilton, the Reynolds Pamphlet was published in 1797. His tarnished reputation caused him to sit out the election of 1801. Then he was killed in a duel in 1804. Had he lived, I bet the next election could have been his. Unfortunately, he ran out of time.

There is another recurring motif in the musical that speaks to Hamilton’s electability. It is the way LMM juxtaposes the characters of Alexander Hamilton and Aaron Burr. From the moment they meet, Burr advises Hamilton that if he wants to get ahead he needs to, “Talk less. Smile more,” stating further that he shouldn’t “let [people] know what you’re against or what you’re for.” Hamilton’s every action in the musical defies this philosophy. He always has an opinion. He always takes a stand on it, often in writing.

I would like to believe that if Alexander Hamilton had been alive for the election of 1805, he could have run for president on a platform of honesty. That plus his ability to take a stand and not waver would have made him a shoo-in for election. Better still, it would have restored to greatness the concept that honesty is the best policy.

Thanks for reading this blog! If you enjoy my writing, please consider reading my book, Love, Loss, and Moving On. It is available on Amazon: https://amzn.to/2IOZqUC 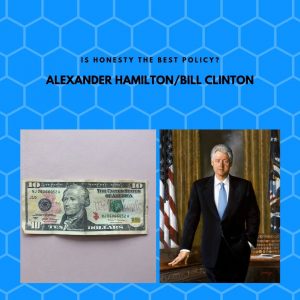