I have a pair of walking shoes I don’t know what to do with. There are too many memories associated with them to wear them again – or to throw them away. I actually think I should bury them but I haven’t done that either. These are the shoes I wore in 2014 on a trip to Warsaw, Budapest, Vienna, and Prague which means they are the shoes I wore to Auschwitz and Birkenau. Do they carry traces of human life? I don’t know. But in my heart, it is possible, so they seem sacred.

I am thinking of concentration camps and my shoes today because I just finished reading Gerda Weissmann Klein’s Holocaust memoir, All But My Life. It was written in 1957 and updated with an epilogue in 1994. So compelling is her story that in 1995 HBO and the United States Holocaust Memorial Museum produced a documentary about her experiences called, One Survivor Remembers. It won an Academy Award for Best Documentary Short.

I know there is an official Holocaust Remembrance Day and this in not it, but the mandate of this book can be expressed in one word: Remember. And so I will, by telling you the places my shoes have been.

In Warsaw: The mindset of the tour guides at Auschwitz and Birkenau is that guests are visiting a cemetery. Thirty-five million visitors have been to these cemeteries since they were opened to the public two years after the liberation. In that 1.1 million people died at Auschwitz, 960,000 of them Jews, I thought visiting these camps would be the most wrenching part of the trip. But that wasn’t the case. I was prepared to be horrified at the concentration camp, I was not prepared to be horrified elsewhere.

In Vienna: These things shocked my nervous system:

In Prague: It was staggering to visit the Pinkus Synagogue:

In Budapest: I missed a wrenching Holocaust memorial due to rain. But even knowing about The Shoes on the Danube Promenade is jarring. It shows 60 pairs of cast-iron shoes on the edge of the river. They are a memorial to the Budapest Jews killed by the Hungarian Arrow Cross Party. These victims were ordered to remove their shoes, then they were shot, then their bodies fell into the river. There are women’s shoes. There are men’s shoes. There are children’s shoes.

Coming full circle on the wrenching topic of shoes, let’s add this story from Gerda Weissmann Klein’s book. In 1942, when she and her parents were being forced out of Bielitz, Poland, her father instructed her to wear her ski boots. “But Papa,” she replied, “skiing shoes in June?” Three years later, she was one of two thousand prisoners on a “death march” through Germany to Czechoslovakia in the dead of winter. The march lasted from January until May 1945 and only 120 survived. Gerda Weissmann Klein was one of them. She credits the boots.

It’s interesting that something so insignificant as shoes can be so significant. Thus, as I consider mine, I think I’ll just let them rest in peace in the back of my closet. I walked all over Central Europe seeking out Holocaust memorials, I won’t have to walk far to visit this one. 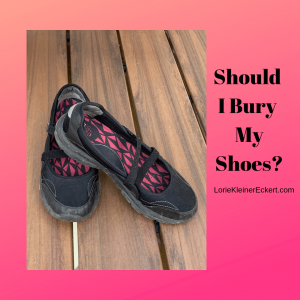 A note from Lorie: Yes, I know I wear my heart on my sleeve. If you like that about my writing, please look into my new book: Love, Loss, and Moving On.

Share this on Social Media
Previous Post: « The Whole Wide World vs the World Wide Web
Next Post: On Matzah Balls, Legos, and Various Things in Between »