I have a long history of taking something simple and making it hard. Two stories about soup making will prove my point and get us to the epiphany of this tale: If it ain’t broke, don’t fix it. 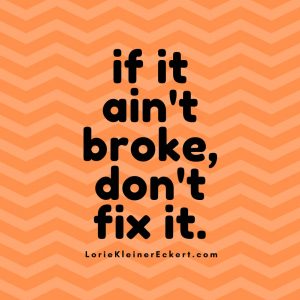 I used to make chicken soup regularly. If someone was sick, I’d grab my six-quart pot; add a chicken, carrots, celery, onion, and seasonings; cover it all with water; bring the mixture to a boil; simmer it for two hours, and serve up the broth to the sick person. Oh, wait. I left out a step. I would taste it before I served it to make sure it tasted like chicken soup instead of hot water. If it didn’t, chicken bouillon granules came to the rescue, magically altering the taste.

This was my chicken soup strategy for 35 years until my daughter’s mother-in-law, Cindy, gave her a cookbook from American’s Test Kitchen. Since Cindy is a great cook, and this was a cookbook she was recommending, I gave their recipe for chicken broth a try. It was labor-intensive, involving the repeated handling of four pounds of chicken legs. First, I had to use a meat cleaver to hack those legs into two-inch chunks. Then I had to brown those little pieces in hot oil in a Dutch oven. This was done in batches because they didn’t all fit in the pan at once. Then I added onions, covered the pot, and let it all cook until the chicken “released its juices.” Only then did I add water and spices to create the broth. At the end of the soup’s cooking time, I had to strain the soup in order to completely pluck those little chicken chunks out. I will confess that the soup was delicious but that I was unwilling to ever make it again because I am too scrawny to wield a meat cleaver and because browning all of those little chicken chunks was an oil-splattering mess.

Still wanting a new and improved chicken soup I turned to Ina Garten (The Barefoot Contessa) for her Homemade Chicken Stock. Her recipe starts off with three five-pound chickens that need to simmer with loads of fresh herbs and other ingredients for four hours. Even though boning all that chicken at the end of the cooking time nearly does me in, I have made this recipe many times. But guess what? I need to taste it before serving it. In spite of all those ingredients, it sometimes comes out tasting like hot water and needs the bouillon granule remedy.

The end result of this culinary misadventure is that I don’t make chicken soup anymore; it’s just too exhausting. As I step back from this sad story I have to wonder what was wrong with my chicken soup in the first place? After all, it had a 35-year track record of being enjoyed by my family. However, I felt I was cheating to add those chicken bouillon granules and I am NOT a cheater. The Ina Garten experience teaches me I am not a cheater, I am a resourceful cook instead. It also helps me see these broader life lessons: 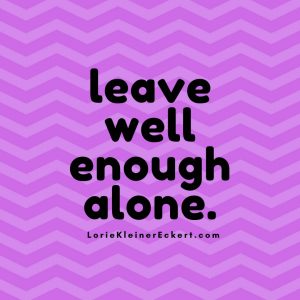 Though these are terrific life lessons, I have a problem with them. I have already learned them many times in life only to forget them and need to learn them again. Take my hobby of quilt making as an example. I was already a professional quilter, designing all my own unique patterns when I read a book by another professional quilter named Freddy Moran. She famously states that if ten fabrics work well in a quilt, 100 will work better. Since she had a book in print via a major craft publisher, I took her opinion for God’s truth and tried a few quilts using her methodology. Since I have difficulty making four or five fabrics play nicely together in a quilt without clashing you can imagine how difficult it was for me to have 100!

The end result of this sewing misadventure is that I stopped making quilts for about a decade because quilting had become too hard. Fortunately, I managed to pick up the craft again to make baby quilts when my grandkids started to arrive 13 years ago. Even I knew that a baby quilt had to be simple in nature. Instead of creating an heirloom with hundreds of fabrics in it I was creating a utilitarian piece ready to face hundreds of cycles in a washing machine.

The question becomes this: How am I going to remember these lessons and not screw myself over again in some other area of my life?

And the answer is this: I don’t know.

However, I am reminded of a favorite book called Illusions, by Richard Bach. In the book, a god figure comes to earth to teach a mere mortal about life. The god tells the mortal that each person is put on earth to figure out the answer to some specific question, stating further, “Here is a test to find whether your mission on earth is finished: If you’re alive, it isn’t.”

So that’s where I will leave this, happy to be alive even if it means I will have to go a few more rounds before I finally learn my lesson that better is the enemy of good enough! 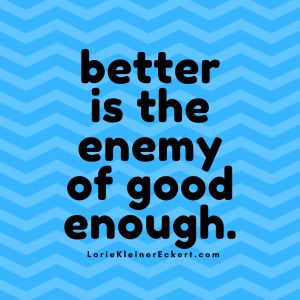 A note from Lorie: If you love my stories please consider reading my book! It’s available in paperback and as an eBook on Amazon.