Have you ever wondered how you would have handled a major historical event if you had been alive to experience it? As a Jew, I often wonder if I would have been smart enough and brave enough to leave Europe before Hitler deemed it too late. I also wonder if I were not a Jew in Europe at that time, if I would have been courageous enough to help the Jews. A righteous gentile. Would I have earned that exalted title? And so, as I learn an interesting bit of 9/11 history, I wonder how I would have responded in that situation, too. Specifically, when American airspace was closed after the terrorist attacks, all planes headed for the United States had to go elsewhere. Thirty-eight of them landed in Gander, Newfoundland, where they remained for almost a week. The warm welcome these 7000 “Plane People” received from the 9000 residents of Gander is an amazing tale that I will talk about next. But my question is this, would I have been a gracious receiver of the kindness of strangers or would I have been the “B-word” instead, just needing to get home, now!

I first became aware of this story when the musical, Come From Away, arrived in Cincinnati as a part of my theater subscription. It had been nominated for seven Tony Awards in 2017 – including Best Musical – so I was eager to see it. The book, music, and lyrics were created by husband and wife team, Irene Sankoff and David Hein. In an interview, they say they took 16,000 stories (7000 Plane People plus 9000 “Newfies”) and combined them into a 100-minute musical featuring 12 actors (who play multiple roles). In creating such a compact tale, a lot of detail was necessarily left out, but theater goers are still awed by the generosity of the town people and impressed by the adaptability of the passengers.

Viewers also had an inkling of the myriad problems that presented themselves before, during, and after the passengers could deplane. Among them was the fact that checked luggage remained with the plane throughout the almost-week-long adventure. If you have ever made it to your travel destination while your luggage took a detour, you can imagine what this was like for the passengers. For the Newfies, it was problematic, too. Yes, they had to provide beds and blankets and toilet paper and food for their “guests,” but then there was the need for tooth brushes, floss, mouthwash, deodorant, diapers, formula, baby food, tampons, aspirins, etc. And oh my, what were they going to do about people who wanted to take a shower? Would you believe they opened their arms – and shower doors – to these strangers?

Wanting to know more about this story, I looked to the book, The Day the World Came to Town: 9/11 in Gander, Newfoundland, by Jim Defede, an American journalist. He added many fascinating details to the crazy logistics of this tale.

As I read the many details covered in this book, I wondered time and again how I would have handled the experience. I hope I find my answer in the example of Werner Baldessarini who was an executive for Hugo Boss and thus a “celebrity” among the passengers. A wealthy Saudi businessman offered to send a private jet to carry him away from Gander, but he refused the offer. As Defede explains, Baldessarini felt an incredible connection with his fellow passengers rivaled only by his attachment to the townspeople whose compassion was so overwhelming. He felt no need to prematurely break those bonds of fellowship, especially not at a time when hatred seemed to rule the world.

September 11, 2001 is in the past, but hatred has not followed. That’s why I am so taken with this play and with this book. I need to be reminded that good people still exist in this world. And they do. There are over 9000 of them in Gander, Newfoundland.

Want to know a bit more? Try these links!

The interview with Irene Sankoff and David Hein: https://www.broadwayinbound.com/news/video-the-story-of-come-from-away/

Listen to one of the songs, “Blankets and Bedding”:

If you loved this story, please tell a friend about my work. I would like to grow the number of subscribers to my blog/newsletter: LorieKleinerEckert.com 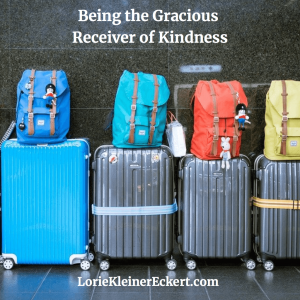