I recently wrote a blog in which I said, “As a Jew, I often wonder if I would have been smart enough and brave enough to leave Europe before Hitler deemed it too late.” In discussing the story with my friend, Kathy, she pooh-poohed the smart enough and brave enough issues and got to the core of my personality: I never would have been decisive enough to leave. I would have weighed the pros and cons, talked to other people about it, and researched my options, but I never would have gotten around to doing anything. Paralysis by analysis, that’s me!

Recognizing the truth in her comment, I went home with a desire to practice decisiveness. The opportunity presented itself with a new Lands’ End catalog I found in the mail. A down jacket I’ve had my eye on was on sale 50% off! I love Lands’ End down coats! Their feathers don’t migrate onto my clothes as do other brands, so there’s no need to carry a lint brush when I wear one! Also, it came in my hard-to-find size: a small tall! And it came in the color I wanted, navy! I immediately added it to my online shopping cart…and then stalled out before completing the purchase. Why? Well…there’s no longer a Lands’ End store near me, so if I didn’t like it, I would need to ship it back. And speaking of such, why weren’t they offering free shipping with the initial order? And why isn’t Lands’ End like Zappos who pays the shipping in both directions? Ultimately, the sale ended before I bought the coat. Chalk one up for decision by indecision.

Instead of berating myself over this, I tried to learn from it, so I did an Internet search for “Decision Making 101.” Though I found many great articles from impressive sources, none were applicable. They all started off telling me not to sweat the small stuff, but what could be smaller than a decision to buy a coat for a woman who owns a closetful of them? And yet, I was clogged up over this issue. Who could help me with that?

As it turns out, Barry Schwartz, PhD is just the fellow. He says the crux of the issue for modern-day decision makers is having too many choices. Schwartz is a psychologist and professor of social theory at Swarthmore College. He is also the author of The Paradox of Choice, Why More is Less, a book that came out in 2004, was revised in 2009, and is still pertinent today. According to Schwartz, an abundance of choices is problematic whether we are buying jeans, or making decisions about education, career, friendships, sex, romance, parenting, religious observance, etc.

To explain his thoughts, the book opens with Schwartz telling us about an insignificant purchase of his own: He bought a pair of jeans. He confesses that he’s the sort of fellow who wears his clothes until they fall apart. When his pants ultimately did, he headed to The Gap for a new pair. It had been years since he had shopped for jeans and now it seemed that knowing his size wasn’t quite enough information. What kind of fit did he want: slim, easy, relaxed, baggy, or extra baggy? And did he want a button-fly or a zipper fly? And what kind of look did he want, faded, or regular? He ended up trying on every option. Though he understood there was very little riding on his decision, he felt one of the options must be “right” for him and he was determined to figure it out. He left the store, finally, with a pair of easy fit jeans – and with self-doubt and anxiety.

Clearly, this guy would get my dilemma with the Lands’ End coat. Would my local Dillard’s big sale of the year offer an equally attractive price? Would their coat be a trendier brand? Would it be a better shade of navy? Would its temperature rating be a bit warmer for cold Cincinnati nights? And what about the coats at Macys or Nordstrom? This Dr. Schwartz guy would understand that decision-making in a world of myriad options is tough.

Better yet, I now understand it too, so I can forgive myself when I am very actively sweating the small stuff. As for larger decisions in life? For the most part, I’m pretty good at those. Like Decision-Making 101 tells me, I can identify my main objective. I can make a list of pros and cons. I can do the research to eliminate bad options. I can seek the advice of someone I trust. And ultimately, I can decide.

But then there’s the issue of being in Europe during the rise of Hitler. To leave or not to leave, that’s still a tough question. It’s in a class of its own. I have no idea what I would have decided. Thank God I didn’t have to.

If you enjoy my blogs, please try my book! Love, Loss, and Moving On is available on Amazon in eBook and paperback formats. 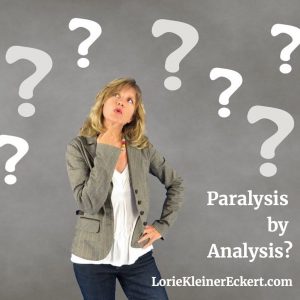