A story of nice, nice people 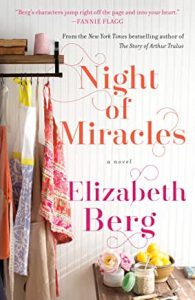 (Note: Some of the links in this blog are affiliate links, meaning, at no additional cost to you, Lorie will earn a commission if you click through and make a purchase on Amazon. More details here.)

Night of Miracles is the second of three books in Elizabeth Berg’s Mason, Missouri series. The first book was The Story of Arthur Truluv, and the third book is The Confession Club.

I absolutely loved The Story of Arthur Truluv. In it, Berg takes an odd assortment of people and turns them into a family. Thus, there was a lonely widower named Arthur Moses, an old spinster who lived across the street named Lucille, and a troubled teenager named Maddy Harris, all of whom came together in the story to show each other — and the reader — what Truluv is all about.

I had just finished reading a book called The Silent Patient, that had NO likeable characters, so it was a delight to pick up Night of Miracles because as is often the case with an Elizabeth Berg book, it was chockful of nice, nice people.

Happily, we are reunited with Maddy and Lucille. And then we meet:

All of these characters are charming people with compelling stories, and it is fun to read about them. However, as much as their stories overlap and coincide, they never coalesce to the level Elizabeth Berg reached in The Story of Arthur Truluv.

Note: Read my reviews of the other two books in the series: Mason #1 is called The Story of Arthur Truluv. Mason #3 is called The Confession Club.