Being Japanese, German-American, or Jewish During WWII 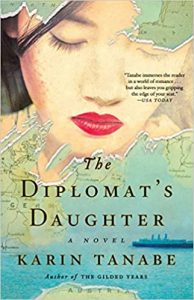 Emi Kato is the daughter of Norio Kato, a Japanese diplomat. She has lived in many places due to her father’s work – Washington DC, Vienna, Berlin, and London. When we meet Emi in the book’s prologue, it is 1943, she is 21 years old, and she is on a ship bound for Japan. In her musings, she thinks about two young men, Leo Hartmann and Christian Lange.

For a while, it seems like this is going to be nothing more than a love story, or a double love story, featuring Emi and Leo and then Emi and Christian. But, the book is more than that. The story shows us the experience of three different groups of people during WWII.

Emi was in a relationship with Leo from 1936-1938 when they went to school together in Vienna and were the two odd balls, he being Jewish and she Japanese. Thanks to their teenage relationship, their two families knew and admired each other, and thus Norio Kato was instrumental in helping the Hartmann family escape to Shanghai.

Emi’s family then moved on to live in the United States only to be caught up in the war themselves, when Japan aligned itself with Hitler in 1940. All the diplomats and their families were sent back to Japan, but Emi contracted tuberculosis and was denied passage on the boat with her father. Instead, she and her mother were sent to an internment camp in Crystal City, Texas. It is here that she meets seventeen-year-old Christian Lange, a German-American, who was almost as hated in the United States as she.

The Emi/Christian relationship does not last long because Emi and her mother are sent back to Japan. Once in Tokyo, her parents send her to Karuizawa, a city where over two thousand foreigners from neutral countries lived, making it fairly safe from American bombs. Christian, heartsick over Emi’s departure, enlists in the American army to get himself sent to Japan to find her.

Going to war to find love? Hmmm… Perhaps a weakness of the book is that young love can be so over-the-top, it is painful to observe. The book’s strength, though, is that it allows us to see the war through many sets of eyes:

Through all these eyes, we never lose sight of the story’s basic question, “Will young love last?” It takes until the last page to find out.