My daughter’s three sons are book lovers. The older two are nine-and-a-half and almost seven. An easily conjured image finds them sitting horizontally across an easy chair, back propped up on one of the arms and legs draped over the other as they plow through a book. As for the little guy? He just turned three and loves to be read to, often requesting the same books repeatedly. It is adorable that he has memorized some of his favorites and like an actor on a stage, can recite those books word for word. This is worthy of praise! Indeed, I am boasting about it! It’s great to see kids read, right? I have to wonder, then, how and why this admirable trait falls out of favor as the child becomes an adult?

According to the Washington Post, a survey from the Pew Research Center and Gallup found that the percentage of adults who have read NO books within a year’s time tripled between 1978 and 2014. You’re wrong if you think computers, cell phones, and video games are to blame. It’s TV time that is the culprit. In 2017, Americans spent more than 2 ¾ hours per day watching TV. This was ten times the amount of time they spent reading for pleasure.

Call me silly, but if my grandkids were binge watching TV, I wouldn’t be boasting about, I’d be finding great books to suggest to them instead. I offer that same help to adults now. For anyone wanting to increase their reading time, here are five books to consider.

What it’s about: This is the story of 15-year-old Elizabeth Marie Hall. As the book opens we learn that she was hit by a car and killed. The author has the audacity – and the ingenuity – to take us to the afterlife with Liz and to paint “life” there in great detail. My favorite part of her imagining is that a person ages backwards until he/she is a baby again and is then reborn.

Why I recommend it: Of the 24 books I read in 2019, this was perhaps my favorite. I particularly love that it is considered Teen Fiction, proving there is no need for adults to shun this category.

Book: Where the Crawdads Sing (Published in 2018)

What it’s about: This is the story of Kya, the so-called Marsh Girl. At a young age her siblings and mother abandon her leaving her with an abusive and alcoholic father who ultimately abandons her too. Thus, at the age of ten (10!) she is alone in the marsh to negotiate life. The broader community not only does NOT take her in, but scorns her. The natural world around her becomes her solace, best friend, and teacher.

Why I recommend it: There are tons of books that would be relatively easy for an author to write. For instance, books where there is a family secret that explodes decades later, impacting a handful of main characters. Those books are a dime a dozen. Thus, it’s wonderful to find a book that shines with some sort of special knowledge as this book does. Delia Owens is a wildlife scientist with a Bachelor of Science degree in zoology and a Ph.D. in Animal Behavior. As a child, she and her family spent every summer in North Carolina, which is the setting for this book. She knows and teaches us a lot about the Carolina coastal marsh. Perhaps other writers could have researched all the information for this book, but Owens gives it to us from her heart.

What it’s about: For anyone who has seen the musical, Hamilton, this historical novel will fill in lots of details that the play glossed over. Told from Alexander Hamilton’s wife’s point of view, Eliza Schuyler Hamilton has 621 pages (in the paperback version) to set the record straight.

Why I recommend it: After seeing the musical, I hoped that Lin-Manuel Miranda (the creator of the play,) transmitted history correctly because his version of history now seems to be the default setting for America’s understanding of the Revolutionary War. Like the old Paul Harvey radio show, this book gives “The Rest of the Story.”

What it’s about: Ernt is a volatile Vietnam vet who frequently moves his family around in hopes of finding happiness. When a war buddy dies and leaves him a cabin and land in the wilds of Alaska, off he goes with wife Cora and daughter Leni in tow. In this rough environment, Ernt goes from intimidating his wife and daughter to seriously beating Cora. Beyond showing us the difficulties of living in a remote part of Alaska, the author does a great job of depicting a codependent relationship – Cora makes excuses for Ernt’s violence and refuses to tell anyone what’s happening to her no matter how bad it gets.

Why I recommend it: In clearly showing how and why this abusive relationship formed, the author helps other women who are in such a situation. As every reader roots for Cora, hopefully a reader or two will decide to root for herself as well.

This is an odd recommendation:

What it’s about: This book is the first in a series called Percy Jackson and the Olympians. As the series starts, Percy is a twelve-year-old boy who is about to learn he is a half-blood/demigod. Translation: he is the child of a human mother and a Greek god; in this case, Poseidon, the God of the Sea.

Why I recommend it: I’m not really recommending this specific book. Instead, I am recommending a concept: If adults are looking for ways to bond with kids, a good idea is to read the books they are reading. It gives you something specific to talk about. In this case, I read about Percy Jones in order to bond with Josh, the nine-year-old I mentioned earlier.

Looking for even more books to read? Please consider my newest book, Love, Loss, and Moving On. If you’ve reinvented yourself after the loss of a loved one, this book’s for you. Did you go a bit crazy in the process? Yep! Me too. 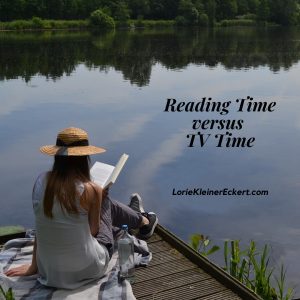