You Learn What You Live 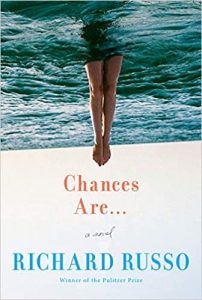 I loved this book and cried my eyes out through the last twenty percent of the story when I read it – and then again when I listened to it on audiotape. It is the story of three men who are in their mid-sixties. Lincoln, Teddy, and Mickey have been friends since they were teenagers. They met in college, where they called themselves the three musketeers. Beyond the usual college-type escapades, they share two life-altering experiences. Number one was the night of the nation’s first draft lottery in December, 1969, which determined their recruitment status for the war raging in Vietnam. Number two was the fact that they all loved the same girl, a fourth musketeer of sorts, Jacy. Where this more-than-love-triangle goes wonky is that right after college ended, Jacy disappeared. She has not been heard from in over 40 years.

As the book opens, the friends reunite in the same location of their last visit 44-years ago, a vacation home owned by Lincoln’s family in Chilmark, Massachusetts. Clearly, we are set up for a book that tells the same story from varying viewpoints and for a whodunit. I don’t care for either of these elements in a book. But, I love Richard Russo’s writing – or more to the point his understanding of how the human heart functions – and so I was willing to give this one a chance. I was richly rewarded.

What I loved best about this book is that Russo lets us know in detail about each of the main characters’ family of origin, the parents in particular. And we can see – so very clearly – how they became the people they are after seeing the mold. I don’t mean that these characters are “chips off the old block,” but instead, that they still see shadows of their parents, or hear whispers from those parents all throughout their lives.

If you have read Richard Russo’s autobiography, “Elsewhere,” you will know about his family of origin, his mother in particular. She was more than a shadow or a whisper. Because of her mental illness, she was a major character in his life up until her death. For instance, when he went off to college, she went off to college with him. Knowing this, it is particularly poignant when Lincoln summarizes his life with his difficult dad by saying, “paternal love was permitted, even if your father could be summed up in a single word and the word was impossible.” It is also poignant to realize that Teddy – a person who struggles with mental illness – is the most sympathetic character in the book.

As a parent who has raised three children to adulthood – and sweat bullets over them – this is what made the book so stellar for me. It is gratifying to think that I am “with” my children even after they leave the nest. And since I am “old” like Lincoln, Teddy, and Mickey, hopefully this will be true even after I am gone.

If you, like I, believe it to be true that we learn what we live, Chances Are you will love this book.