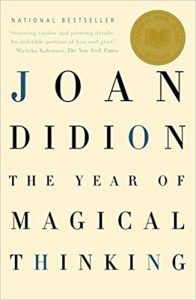 This is the first book by Joan Didion I have read. Furthermore, I have read none of the books written by her late husband, John Gregory Dunne. Both sound like such famous names, but I knew nothing about them before starting this memoir.

I was pulled into the story immediately by the book’s opening where John Gregory Dunne dies suddenly of a “massive coronary event.” This happened at their home in New York as he waited for her to serve dinner. Adding to the tragedy is the fact that they had just returned from a nearby hospital where Quintana, their adult daughter and only child, was in her sixth night of unconsciousness. She was the victim of a flu that turned into pneumonia and then into septic shock.

To say the least, this is a compelling story line! The fact that the memoir received the National Book Award for nonfiction in 2005 adds to its appeal.

In spite of this, my immediate opinion after reading the book was that it was a bit disjointed. And then I argued with myself over this thought. Authors are told to show and not tell the reader what is going on. Since disjointedness is probably a hallmark of grief, it can be argued that she is showing us her grief in this manner.

Another element of grief is that thoughts often come in continuous loops. Again, she SHOWS us this by opening the memoir with these words and then by repeating them in part or whole throughout:

Life changes in the instant.

You sit down to dinner and life as you know it ends.”

A final element of grief that she shows so well is what she calls the “vortex effect,” meaning the way memories drag her down when she goes to venues associated with John or Quintana. I have often felt that the older I get, the more I CAN’T listen to oldies music or even drive down the street without being assaulted by memories. It was nice to have Didion validate and even name this experience.

I must confess that I wanted to know more after this book ended. Quintana’s illness had been a large element of the tale, and I wanted an update on her condition.

Here is the chronology of the book:

But is there more to the story than that? As it turns out, Quintana died on August 26, 2005 at the age of 39! Joan Didion did not choose to delay the release of the book in order to update it. Instead, she wrote a second memoir called Blue Nights, which was released in 2011.

Hmmm. I might need to read that one too…