A Brother & Sister & A Wicked Stepmother 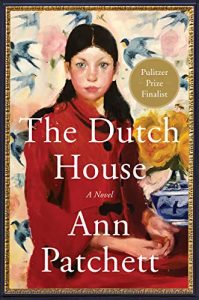 I liked this book, but must admit that when I was halfway through it, I realized it hadn’t reached any sort of a turning point or climax that would then be resolved in the remaining pages. Instead, the story – which I found to be compelling – just continued on like a first season of a miniseries as I got to know the main characters more, living through fifty years of their lives. It could easily have gone on for another ten years, but it did not.

Refraining from spoilers, here is a brief synopsis. This is the story of Maeve and Danny Conroy. They are the children of Elna and Cyril Conroy. In the early stages of building a real estate empire, Cyril bought a property called the “Dutch House,” which had been built by a Dutch family, the VanHoebeeks. He bought the house – a mansion, really – complete with all of its furnishings as a surprise for his wife. Suffice it to say, she was not thrilled with the surprise. Some years down the road, she abandons the house and the husband and the two kids.

Ultimately, Cyril remarries a widow. The reader knows immediately that Andrea is more interested in the man-sion than she is in the man. Before long, she proves herself to be a wicked stepmother, and bad things happen to the good children.

Their treatment at the hands of Andrea is a super glue that holds the brother and sister team very-tightly-together throughout their lives. A whole section of the book finds them in Maeve’s car, parked on VanHoebeek Street, peering up at the house/mansion/castle in which they once lived, rehashing the events of their lives. And even when they finally leave that part of their past behind, they drive away together. Their tight bond is not diminished.

I have read other novels by this author, most recently, Commonwealth, which evidently has autobiographical elements. It mirrors the story of Patchett’s parents’ divorce and her subsequent life with a step-father and step-siblings. At the time that book came out, Patchett said, “I’ve been writing the same book my whole life – that you’re in one family, and all of a sudden, you’re in another family, and it’s not your choice, and you can’t get out.” She also describes her stories this way: “A group of people are thrown together, and must forge connections in order to survive.”

Clearly, Patchett has written the story again in The Dutch House.

I always find it fascinating when an author’s real life spills out into his/her fiction as it does here. Therefore, the next Patchett book I plan to read is her memoir, This Is the Story of a Happy Marriage. According to Amazon, it takes us into Ann Patchett’s life from her childhood to the present day, including a disastrous early marriage and a later happy one.

Count on me to tell you about it one of these days soon!