This story will sound like it’s for quilt-makers, but it’s really about the magic of being experienced at an endeavor, and it should be encouraging for all. It begins the other day as I worked on a new quilt. I had designed it myself, and had an aesthetically pleasing rendering of the ultimate design to guide me. The first five blocks I made were gorgeous but not so much the next fifteen. After thirty-six years of quilting, I have found myself in this predicament before, but this time, an interesting thought popped to mind. Instead of being bitterly discouraged and wanting to pack up the project and give it to Goodwill, I was oddly excited. I didn’t know what I would do to fix the quilt, but I knew I would do something, and that ultimately, I would be pleased.

Taking a little break from sewing, I turned to the book I was reading. It was Richard Russo’s new novel, Chances Are. One of the characters, Teddy, is a book editor who has decided at age 66 to write a book of his own. He is immediately plagued with doubt, that is, until the magic of experience kicks in. Here is how Russo describes Teddy’s thoughts, “It probably wouldn’t be any good, but if it wasn’t perhaps he’d be able to fix it. He’d spent the last decade fixing other people’s botched jobs, so why not one of his own?”

I looked heavenward and thanked God – and my dearly departed mom and dad – for sending this encouragement my way. I have decades of quilting experience, surely, I could fix this!

Eager as I was to get back to my sewing – or back to my reading because Richard Russo’s book is good! – it was time to start my work day, time to look at email. It was there that I found the latest blog from a writing colleague, Colleen M. Story. Titled, 5 Mistakes I Made When I Started Writing, her fifth mistake was “Failing to Focus on Finishing My Projects.” This section of her blog talks about the unfinished novels that once existed in her desk drawer. She says, “My mistake was in thinking that these stories were unsalvageable. I’ve since learned that pro writers can salvage most any story—because they’ve learned how.”

OK, Mom/Dad/God, I get your point!

It was easy to get back to the quilt because it was spread out on my bedroom floor, which is a good quilt-making strategy. It allows the quilt to be seen morning, noon, and night, literally shedding different light on the project – and problem – across the day. It also keeps the problem ever present though on the back burner. But eventually things heat up back there, and like popcorn popping, ideas start to emerge. And so, I remembered an unsalvageable quilt that I salvaged a dozen or so years ago. When I found a photo of it, I was amazed that it likewise contained twenty quilt blocks that did not work well together in a standard layout – five rows of four blocks – but that were great when I roped off some of the blocks and framed them. That exact plan could work for the current quilt. Chalk one up for experience! 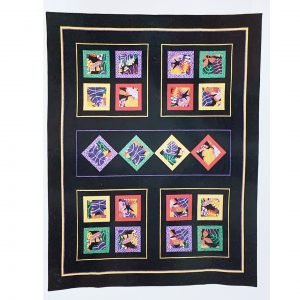 (This is the quilt from long ago.)

In the 1990’s I worked as a motivational speaker. I illustrated my talk with my artwork, quilts with words and symbols pieced into the design. One of the quilts I showed back then featured a big purple and yellow pansy. The words below the flower said, WHEN I SOW, I REAP. I always made a confession as I showed the quilt that it could easily have said this instead, WHEN I SEW (S-E-W), I RIP. Thus I acknowledged the goof-ups that occur in the quilt-making process and the necessity to rip them out. It can be a painful process, but as Harry Truman said, “The reward of suffering is experience.”

If stories of quilting – and writing – fall too much into the creative realm, let’s take this topic to a left-brained endeavor via an old joke.

There was a retired engineer who was called back to his company to figure out what was wrong with a multi-million-dollar machine that was on the fritz. Many other consultants had looked at the problem to no avail. The retiree spent a day listening to the machine whiz, whir, and beep before arriving at his diagnosis. He used a piece of chalk to draw an X on the component that was malfunctioning. The company replaced that unit, and indeed, the machine was operable again! When the engineer submitted his bill – for $50,000 – the company asked him for an itemization. And so, he provided it:

I close where I started, singing the praises of experience. It’s a valuable commodity.

Need something to read after finishing this blog? Read a good book! Check out the new book review section of my website for suggestions. 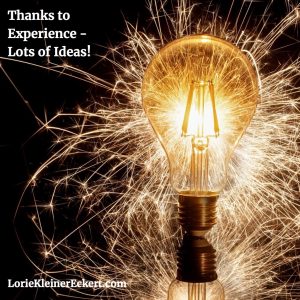