A Heartwarming Story About 9/11 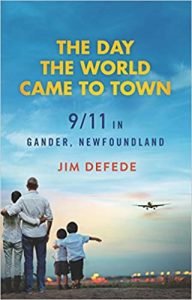 Did you know that on September 11, 2001, after the terrorist attacks in New York, air space over the United States was closed? All planes headed to the U.S. from overseas had to put themselves down somewhere and 38 of them ended up in Gander, Newfoundland. Those planes were not able to take off again for five — and in some cases — six days. If you know of the story from the Broadway musical Come From Away, you know about the amazing generosity and kindness the 9000 Newfies showed the almost 7000 “guests” who, among other things, were unable to get their checked baggage out of cargo through the entire adventure.

Even if you saw the musical, this book will be of interest. After all, with 9000 Newfoundlanders and 7000 guests, there are 16,000 stories to tell and a play that is 100 minutes in duration can only cover so much ground.

One of my favorite stories in the book was learning about the well-to-do passenger, Werner Baldessarini, who was an executive for Hugo Boss. Accustomed to the finest menswear, it was quite a shock to his nervous system — and to his bottom — to have to wear the underwear available to him at the local Walmart. (Plan B would have been borrowed underwear from a townsman.) Ultimately, a high-end retailer in nearby Canada learned of his plight. Since that merchant carried Hugo Boss merchandise, he traveled to Gander to hand-carry new underwear to Baldessarini. As a couple more days passed, a wealthy Saudi businessman offered to send a private jet to carry Baldessarini away from Gander. But by that time, Baldessarini refused the offer, even though it meant spending more nights sleeping on a cot in the high school gym. As DeFede explains, Baldessarini felt an incredible connection with his fellow passengers rivaled only by his attachment to the townspeople whose compassion was so overwhelming. He felt no need to prematurely break those bonds of fellowship, especially not at a time when hatred seemed to rule the world.

If you, too, would like to be reminded of human kindness at this time of great divisiveness in the United States and in the world, I recommend this book to you.