A Couple Dozen Essays About the Life of the Author 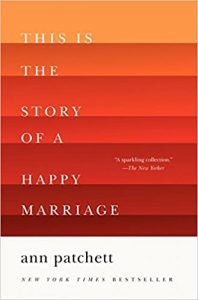 I read this book because I’m nosy. I didn’t exactly want to know about Patchett’s marital situation; I wanted to know about her mother’s. Why? Because in researching Patchett for a previous book review, she indicated that her book, Commonwealth, had autobiographical elements. It mirrors her parents’ divorce and her subsequent life with a stepfather and four step-siblings in a city far away from her dad. When I read on Amazon that This Is the Story of a Happy Marriage (TITSOAHM) would take the reader into Patchett’s life from her childhood to the present day, I thought reading it might give the juicy details. By the way, I “know” Patchett’s mother. She is Jeanne Ray, the author of one of my favorite books, Julie and Romeo.

I didn’t understand until I had TITSOAHM in hand that it is a compilation of 23 essays written by the author. Some of the essays are new, but most had already been published in various magazines through the years. These stories roam far and wide in subject matter. An essay with the same title as the book gives Ann Patchett’s marital history. Here are the basics:

As for the mom’s divorce and remarriage? The details are different from Commonwealth’s salacious plot line though very interesting. Basically, the mom’s second marriage was a 20-year roller coaster ride kept on track by the mom’s refusal to be – you’ve heard this before – twice-divorced.

It takes until the 20th of 23 essays to reach the essay with all the marriage details. There were times I wondered why I needed to know the information that came in the stories before it. But by book’s end, I realized those first 19 stories were like 19 dates with the author where I grew to like and admire her, where I came to see why Karl might have waited around for eleven years to marry her.

What I found so wonderful about Ann Patchett is that she loves and is devoted to so many people to include: her mom, her maternal grandmother, her dad, her dad’s second wife, her dad’s second wife’s mother, Karl’s first wife, Karl’s first wife’s second husband, and of course she has a great relationship with her partners in the book store she co-owns in Nashville, Parnassus Books.