Who’s Nuts and Who’s Not? 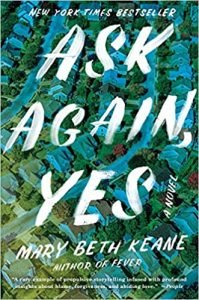 I found myself shouting at one of the characters in this book with regularity. “No! Don’t do that! That’s a bad idea! Are you nuts?” As I tell you the basic story line, perhaps you will understand my sentiments.

The book opens in the early 1970s with two rookie cops in the New York Police Department, Francis Gleeson and Brian Stanhope. They are partners briefly but then go separate ways professionally. However, they somehow both move outside the city to the same town – Gillam – and become next door neighbors.

Francis and his wife, Lena, go on to produce three daughters. Brian and his wife, Anne, have one son, who was born after a first pregnancy ended tragically. Francis and Anne have something in common – they are both Irish immigrants. However, this connection does not help the two families connect. Lena and Anne have something in common – Lena’s youngest daughter, Kate, and Anne’s son, Peter, are six months apart in age. But this connection does not help the families connect. Anne seems to be the stumbling block in both situations. What’s up with Anne? Well, a lot, as we will come to find out.

In spite of the Anne-produced coldness between the families, their virtually-same-age kids, Kate and Peter, become inseparable friends. That is, until they are in 8th grade and unstable Anne does something TERRIBLE. Her action harms a member of the Gleeson family, and tears the Stanhope family apart. All the Stanhopes leave Gillam at this point.

Years pass, and ultimately Kate and Peter find each other again. This is when I started to shout at Kate for decisions she makes, namely to marry him, have kids with him, and allow his mother back into their lives. Is she nuts?! Or more to the point, shouldn’t she worry that Anne is nuts and steer clear of anyone named Stanhope?

With chapters told in alternating voices, the reader gets inside the heads of many of the main characters. This allows readers to decide who’s nuts and who’s not. It also allows readers to truly understand the characters. Finally, it makes for a very poignant ending. As Francis ruminates on life, love, and forgiveness, we know every bump in the road he traveled to reach his conclusions.

This book was named one of the best books of the year by People, Vogue, Parade, NPR, and Elle. My opinion? They were NOT nuts in choosing it.