Twin Sisters – One Black, One White 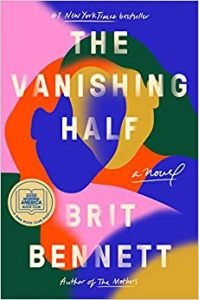 This book is set in a fictional town called Mallard, a small town in the South with a strange history. It was founded by a man named Alphonse Decuir, who had been a slave, and whose parentage included a white father and black mother, former master and slave. Decuir inherited the land – the previous sugarcane fields he had worked – from his father. Using the land, Decuir created a town for people like himself, people “who would never be accepted as white but refused to be treated like Negroes.” The town was founded in 1848 with “lightness” as one of its goals. “A more perfect Negro. Each generation lighter than the one before.”

There are many richly drawn characters in the book, but the stars of the story are Desiree and Stella Vignes, descendants of Decuir. They are twin sisters who leave town at age 16 to go to the big city, New Orleans. Before long, they part ways and lose track of each other.

The book opens in 1968 as Desiree is returning home after a 14-year absence. She arrives with a suitcase in one hand and a child aged eight in the other. The child is “black as tar…blueblack, like she [had] flown direct from Africa.” Thus, we see evidence of Desiree’s choices over the last fourteen years.

Ultimately, we learn of Stella’s whereabouts. In 1968, at the exact time her sister is returning home, she is protesting the fact that a Black family is about to move into her ritzy Brentwood, California neighborhood. Thus, we learn of Stella’s choices over the last fourteen years. She married a white man, gave birth to a “white” daughter, and lived a white life. No one knows her secret.

Desiree’s daughter, Jude, grows up in Mallard but is never accepted. After enduring years of being called Tar Baby, Midnight, and Darky Mudpie, she is finally able to leave for college in 1978. Accepting a track scholarship at UCLA, she heads to California.

Out in the broader world she finds acceptance and love with a man named Reese, who has his own identity issues. She also stumbles upon a woman who looks amazingly like her mother. Can it be Stella? The woman has a college-aged daughter named Kennedy, and Jude befriends her.

When Kennedy learns she and Jude are first cousins, she has identity issues too, which cause her to utter my favorite line in the book: “Nothing had changed, really. She’d learned one thing about her mother, but what did that amount to when you looked at the totality of her life? A single detail had been moved and replaced. Swapping out one brick wouldn’t change a house into a fire station. She was still herself. Nothing had changed. Nothing had changed at all.”

Clearly there is a lot to talk about after reading a book like this: Race issues and issues of personal identity are just the starters. There is another entire plot line that I have not mentioned, which is equally fascinating. All of this being the case, it is easy to see why The Vanishing Half is a Good Morning America Book Club Pick.

Beside writing book reviews, I also write BOOKS! Please visit my website to learn about the four books I have in print.