What Is the Truth of Your Life? 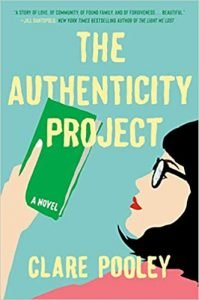 My daughter Shana is the one who brought The Authenticity Project to my attention. She said if this book were turned into a movie, British actor Bill Nighy would be cast as Julian Jessop, insisting the character was written with him in mind. She knew this would intrigue me because I am a huge fan of the star. Indeed, Bill Nighy is the romantic lead in my book, Love, Loss, and Moving On. In it, I use my crush on him as a crutch to get past the loss of a loved one.

Before I even started to read the book, therefore, I Googled the title to see if someone had bought the film rights, and if beloved Bill would be on the big screen again in the near future. What I found was a headline that read, “Transworld wins The Authenticity Project after six-way auction.” This was not a bidding war for the film rights, but instead for the right to publish the book itself. A bidding war for a book is an impressive thing, thus I had a second reason to be interested in this story. Here’s what it’s all about…

The book opens with Julian’s story. He has written it in a journal and he has named the journal: The Authenticity Project. He states “Everyone lies about their lives. What would happen if you shared the truth instead? The one thing that defines you, that makes everything else about you fall into place?”

He then gives the basic facts of his life. He is seventy-nine. He has been a famous and sought-after artist, a dapper and charismatic man. But fifteen years ago, all that fell away after the death of his wife, Mary. At that point, he “reverse metamorphosed from a butterfly into a caterpillar.” His truth at the moment is this: “I AM LONELY.”

Julian’s plan is to leave the journal in a public place hoping another person will find it and write in it. He hopes the experience will be as cathartic for others as it was for him.

And thus the journal passes from hand to hand, and it travels from London to Thailand and back to London again. As this happens, we get to meet and learn the truth about Monica, Hazard, Riley, Alice, and Lizzie. None of these people know each other before they have a turn writing in the journal, but ultimately, they meet. More than that, because they know the truth about the people who wrote in the journal before them, they find ways to help each other. The author does a fine job of making it all believable and of making us root for the entire cast of characters.

I truly enjoyed this book. I am not surprised to learn that foreign rights have sold in twenty other languages! With popularity on that scale, it probably will become a movie. Fingers crossed for Bill Nighy to play the part of dapper and charismatic Julian Jessop one of these days soon.