There’s an Oliphant in the Middle of the Room 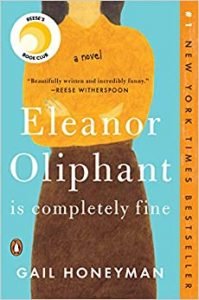 I really loved the oddball, title character of this book, and was rooting for her throughout. But even after finishing the story, I wonder if the title should be this instead: Is Eleanor Oliphant Completely Fine?

Borrowing from a joke that Eleanor herself makes, in this book, there is an Oliphant in the room. The reader glimpses it early on, but does not learn its huge proportion until the end.

I don’t want ruin the book by telling you too much, but here are some early glimpses of the Oliphant:

Knowing these few facts, it’s easy to understand that Eleanor is not your basic 30-year old woman. Simply put, she has no social skills. Since the story is told in the first person, from her perspective, it’s alarming – and amusing – how clueless she is.

Early in the book, she meets Raymond. He is the IT guy at her job, and he comes to fix her computer problem. His diagnosis: “You had quite a nasty virus. I’ve cleaned up your hard drive and reset the firewall. You should run a full system scan once a week, ideally.” As the book progresses and he becomes her first friend – ever – he figuratively tries to do the same things for her life, even checking in on her regularly over lunch dates.

Here is Eleanor’s offbeat response to the first date, “This was the first day in nine years that I’d eaten lunch with a companion, and that I hadn’t done the crossword. Strangely, I felt no concern about the crossword whatsoever.” And here is her response to the second date: “I could almost believe that someone might enjoy, or at least tolerate, my company over the duration of a brief luncheon, but it stretched credibility to think that it could happen twice in one week.”

In spite of the fact that Raymond – and the reader – are truly rooting for Eleanor, there are two questions that book clubs will LOVE to chew. First, even taking her enormous Oliphant one bite at a time, can Eleanor vanquish it? And second, is Eleanor Oliphant completely fine? These are questions readers will ponder long after finishing the book.