Are some losses too large to overcome? 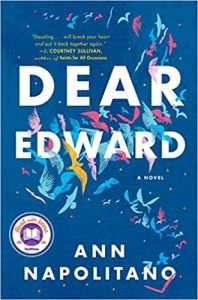 This novel features twelve-year old Edward Adler as the sole survivor of a plane crash in 2013. The flight originated in Newark and was headed to Los Angeles. It was a full flight, and among the 191 people who died were Edward’s entire immediate family, his parents and older brother.

The author alternates between two stories in the book. We get chapters starting at 7:45 AM on the day of the crash and taking us little-by-little up to the disaster at 2:12 PM. In these chapters, we come to know and like not only the Adler family, but other passengers onboard. Her other storyline, begins on the evening of the crash. Edward is in the hospital. His aunt and uncle are at his side. The aunt, his mother’s sister, is his only remaining blood relative. In these parts of the book, the author advances us through the years until Edward’s graduation from high school.

The immediate question for me was this: Is it possible – emotionally – for Edward to survive such an enormous loss?

This is a question I ponder often in reading fiction and nonfiction alike. For example:

All three of these stories make me wonder if there are some losses that are too large to overcome?

As it turns out, this was the question that compelled the author to write the book. In the acknowledgements she says an actual crash inspired the novel. It was Afriqiyah Airways Flight 771. According to Wikipedia, it crashed in 2010, killing 103 of the 104 passengers onboard. The survivor was a nine-year-old Dutch boy. Napolitano says, “It was my worry about that little boy’s path out of tragedy that compelled me to find a way forward for Edward.”

I applaud Ann Napolitano for writing a believable journey for Edward, and for giving me an entire cast of characters to care about, even those who died in the crash.

Up for a little YouTube? Listen to me talk about my newest book, Love, Loss, and Moving On, on the Douglas Coleman show!