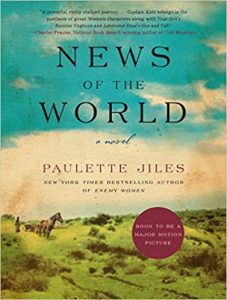 This historical novel was a finalist for the National Book Award in 2016. It is set in the aftermath of the Civil War, and is the story of 71 year old Captain Jefferson Kyle Kidd. He currently earns money by traveling through Texas performing live readings of world and national news to small town folks eager to pay a dime to be in the know.

At one of his readings he learns about a ten-year-old girl, Johanna Leonberger, who four years earlier was abducted by the Kiowa Indians. The US Army has now recovered her but needs someone to get her home, some 400 miles away.

The Captain takes on this responsibility but problems abound. She does not remember English, she does not wish to be rescued from the Kiowa, and indeed tries to escape at every turn. Also at every turn, thieves and various Indian tribes threaten them, not to mention those men who want to take Johanna and sell her into the sex trade.

Over 400 miles “Cho-henna” and “Kep-dun” bond in a story full of warmth and humor. Hankies are much needed for the ending. The only “negative” is that this book is NOT a beach read (which I somehow wanted it to be). One needs time and quiet to absorb its many beautiful subtleties.

NOTE: As of January 2021, this is a soon-to-be-released movie starring Tom Hanks.

Share this on Social Media
Previous Post: « Breaking Up Is Hard to Do – the Parent and Teen Version
Next Post: How To Be Rich In Friends »