A Mom of Adult Kids Comes Out of the Closet 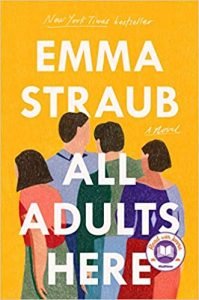 Astrid Strick is a 68-year-old widow with three adult children, three grandkids, and a fourth one on the way. The novel is set in motion when she witnesses an acquaintance getting hit and killed by a speeding school bus. Thinking another bus could take her next, she becomes introspective and begins to review her life. Primarily, she focuses on the type of mother she was, and spends most of the 354 pages of the book doubting her every move in the past.

A lot of huge issues get a light and humorous handling in the book. We have homosexuality and bisexuality, we have abortion and artificial insemination, and we have an extramarital affair thrown in for good measure. When a teenage granddaughter comes to live with Astrid, we get the topics of bullying and transgenderism as well. Since the title of the book is All Adults Here, I could have done without the teenage grandchild and the issues she brought to the table. Wasn’t there already enough to talk about without her?

Be that as it may, the overriding point of the story is that parenting is tough. Though Astrid may have been a bit cold and rigid, and though she may have made mistakes, she tried her best and was more than just adequate. One of my favorite quotes from the book addresses this topic. “That was the truth about parenting, at least as Astrid had done it – most decisions weren’t plans, they were tourniquets, immediate responses to whatever problem was at hand.” But please note that Astrid did apply the tourniquet. No one bled to death on her watch.

And speaking of favorite quotes, I’ll close with what I hope will be my takeaway from this book. It is from a section where Astrid describes two of her children. She says of her youngest child, Nicky, that he “had always been a leaf in a river, content to float.” She says that Elliot, her oldest, “was just the opposite – he tried so hard to be big enough, smart enough, charming enough, that he was none of the three. He was dedicated to the idea of perfection… and [he] lived to check the boxes of adulthood.”

As a 68-year-old woman myself, always one to be a box checker, I love the image of being a leaf in a river and thank Emma Straub for giving me a new goal for which to strive.