Two Sisters: One a Cop, One an Addict 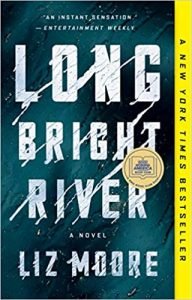 Let me tell you how I came to read Long Bright River and then I will tell you about the book. Spoiler alert, I thought the book was only OK, but the method of finding it was superlative.

Did you know that NPR has created a “Book Concierge” at the end of every year since 2013? It is different from most other best-books-of-the-year lists because it is not a list per se, it is an interactive, mix and match, Venn diagram of book topics to help you find the perfect book.

There are two dozen-ish filters to use such as Staff Picks, Biography & Memoir, Book Club Ideas, For History Lovers, Funny Stuff, etc. You can view these categories one by one, or you can overlap them. For instance, the Staff Picks filter gives me 195 books. When I add a second filter, Biography & Memoir, that brings my choices down to 37. If I add a third filter, Funny Stuff, four books remain. It’s very cool!

But that’s not exactly how I found Long Bright River. Instead, I wanted to listen to a podcast and found one on NPR called Pop Culture Happy Hour. The episode being touted was from January 25, 2021. The episode was called “Book Concierge Great Books about Families.” Loving the Book Concierge, I was hooked by the title! When I tuned in, I found host Glen Weldon and NPR contributor Barrie Hardymon. Ms. Hardymon was recommending three books:

The first two books were already on my radar for must-read-books and the third was intriguing because she mentioned it was on Barack Obama’s must read list for 2020. Since I am fascinated to know what presidents read and since it was the only one of the three titles instantly available to me for free on my library/Libby app, that’s how I came to read Long Bright River.

The book opens with a list of names created by the main character, Mickey (Michaela) Fitzpatrick. All of the people on the list are people she has known who are presumably dead due to drugs. Mickey’s mother and father are on the list. We go on to learn that Mickey and her younger sister, Kacey, were raised by their grandmother, G, a cold, harsh woman. Beyond that, we ultimately learn of a major difference in their upbringing. As a result of it, the sisters have pursued very different paths. Mickey is a police officer and Kacey is a drug addict who has turned to prostitution to support her habit.

Within the first two dozen pages of the book Mickey tells us, “The first time I found my sister dead, she was sixteen.” So, we are set up to worry about Kacey. When there is a series of murders of young women in town, we go on red alert with Mickey. We all fear Kacey will be next. Adding to the worry, Kacey has disappeared. So is she dead or alive? And who is killing all these young women? It sounds like a basic who-dunnit to me and unfortunately, I don’t care for mysteries.

So if I am to rate the Book Concierge, I give it five stars! The book only gets three.

Like my book reviews? Try my blog! FREE gift to new subscribers: a downloadable booklet of motivational quotes, Some Do’s and Don’ts in Life. And tell a friend!