The Circus from a Gorilla’s Point of View 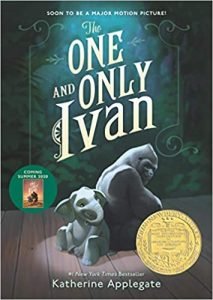 If you cried when you read Charlotte’s Web to your children, prepare to sob when you read The One and Only Ivan to your grandkids. This is the story of Ivan, a silverback gorilla, who lives “in a human habitat called Exit 8 Big Top Mall and Video Arcade…conveniently located off I-95, with shows at two, four and seven, 365 days a year.”

Among Ivan’s friends at this pseudo circus are an elephant named Stella and a dog named Bob. Bob is not a performer, though, he is just a homeless animal who takes shelter nightly in Ivan’s “domain,” sleeping on Ivan’s soft belly. Ivan and Stella have been the starring attractions at the Big Top Mall for a long time, Ivan for decades. Unfortunately, they do not draw the crowds they used to. Stella’s aching foot and limp could be part of the problem. In an attempt to increase business, the owner, Mack, brings in a baby elephant named Ruby. Two more people round out the cast of characters – the handyman at the mall, George, and his daughter, Julia.

When Ruby enters the picture, the status quo gets shaken up as Ivan starts to see things through her eyes. When Ruby worries about Stella’s foot, it exacerbates Ivan’s worries. When Mack trains Ruby to perform using the claw-stick (an elephant training tool that is used to intimidate – and torture – animals), Ivan is as frightened as Ruby. And when Ruby calls their “domain” a cage, Ivan allows himself to see it that way too. Before too long, Ivan is making a pledge to get Ruby to a safer place, a zoo.

But exactly how is a silverback gorilla going to pull off such a stunt?

Clearly, there are parallels between Charlotte’s Web and this book. Both stories include a group of animals and a little girl who loves them. Both stories have to do with the survival of a beloved animal. I cried in Charlotte’s Web when Charlotte died. In this book, I cried tears of sadness not just over a death, but over other ways of parting. I cried tears of joy over reunions. And most of all I cried when I was overwhelmed with pride as the characters faced their new and uncertain futures with supreme courage.

Even when the book was over, I cried as I read the Author’s Note. Here I learned there is a real Ivan, a gorilla who lived in a circus-themed mall in Tacoma, Washington. He spent twenty-seven years in a cage without seeing another of his own kind. Ultimately, he was featured in a National Geographic special called The Urban Gorilla. Thanks to public outcry after it aired, a growing understanding of primate needs, and the bankruptcy of the mall, Ivan was placed on permanent loan to Zoo Atlanta where he lived until his death.

I loved this book. So did the panel who picked it as the Newberry Medal Winner for 2013. So did the folks who turned it into a film that was released in 2020 by Disney+.

Some bonus material: Here is a video about the real Ivan!

Like my book reviews? Try my blog! FREE gift to new subscribers: a downloadable booklet of motivational quotes, Some Do’s and Don’ts in Life. And tell a friend!

Share this on Social Media
Previous Post: « The Midnight Library by Matt Haig
Next Post: Do You Check Your Phone Before You Pee in the Morning? »