In the documentary, The Social Dilemma, viewers are humorously asked, “Do you check your smart phone before you pee in the morning, or while you are peeing?” The implication is these are the only two choices. Not-so-humorously, this is asked as a part of a discussion about online addiction, and of course, online addiction is a risk for lots of people even those who manage to get out of bed, pee, brush their teeth, and eat breakfast before they check their phones.

The old me – the one who existed a month ago – checked the phone before getting out of bed and then minutes later in the bathroom. Hey! Whereas snail mail comes just once a day and never on Sunday, new email, texts, and responses to social media posts can occur during any of the 86,400 seconds in a day! And since I run an online business, it makes sense to check. Right?

Even if I have legitimate reasons to be online, I still have to confess that I am addicted to my phone. But it’s cutesy and benign to say it that way. Let’s try this confession instead: I am an addict.

As I understand things, dopamine is the “drug” to which I am addicted.

I watched the above-mentioned documentary looking for insight. It covers more topics than just the addictive nature of smart phones. For instance, we learn:

All of these are major topics for other blogs on other days. Today let’s address the addictive nature of smart phones as I introduce Tristan Harris, one of the main tech experts interviewed in the documentary. He is a former Google Design Ethicist. Now he is the Co-Founder of the Center for Humane Technology.

Like many tech experts, he attended the Persuasive Technology Lab at Stanford University. Through it, he became a “Behavior Change Expert” learning the psychology of human persuasion and how to build it into technology. As one tiny example, he talks about intermittent reinforcement, the same principle that keeps us at the slot machine. The phone uses it too. Every time you see your phone you are tempted to look at it. It just might have something new for you – 86,400 seconds a day. Harris tells us this is not an accident, it is the intentional design of the phone.

He also tells us about the early days at Google when he served on the Gmail team. They had many conversations about what the email box should look like, what color it should be, and so forth, but no one was working on making it less addictive. Addicted to email himself, he wrote a call to arms stating it was Google’s moral responsibility to address this problem. But, after some buzz around the company, this “cultural moment” passed, and nothing was done.

I also enjoyed learning from Justin Rosenstein. He is a former engineer at Facebook and Google. He was on the team that created the Like Button. Their intent was to spread positivity and love in the world. As it turns out, what the Like Button also spreads is dopamine, the chemical produced by the brain when we do something pleasurable. This includes eating delicious food, having sex, and for evolutionary purposes, it is also includes having successful social interactions.

As he looks back on it now, he says they didn’t set out to be evil, but he compares the Like Button and other dopamine spreaders built into our smart phones as having chocolate chip cookies in our pocket. They are hard to resist to say the least.

Another of the gurus quoted was Aza Raskin. He confessed that he was so addicted to Twitter that he had to write software for himself to break his addiction. Unable to write software, I make a pledge in writing:

Even before watching The Social Dilemma, I had been trying to break my addiction. At my worst, it was my habit to have my phone in hand for all my waking hours, 6:00 AM – 11:00 PM. As soon as I got up, I checked all my email and social media accounts one after another. When the circuit was complete, I often did it again. When I was done, I felt bereft. Surely there must be something else to check, I thought. I also repeated this circuit multiple times during the day, basically any time I was bored. The phone was my pacifier.

Through it all, I said my brain felt tied in knots. Now I think that’s what a brain feels like when it is awash in dopamine.

Relatively speaking, my earlier attempts to change have been successful and I am eager to move on to my new, more stringent plan. As I do, I hold in mind an image of that day I spent forty-five minutes on hold with a merchant, waiting to discuss my problem. Ultimately, the customer service rep was unable to do anything for me. When I got off the phone, exasperated, I sputtered, I spent forty-five minutes of my life on that! Was it worth it?

And yet, every day I spend at least forty-five minutes mindlessly playing with my phone. I understand that it’s not me, it’s the dopamine. But I also understand this is my life and I need to be in control of it.

A Commitment to Myself – in writing – that’s my game plan for change.

If you like this story, you will like other things I have written. Please subscribe to my blog and/or try my new book, Love, Loss, and Moving On. Thank you! 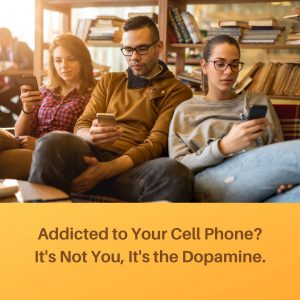