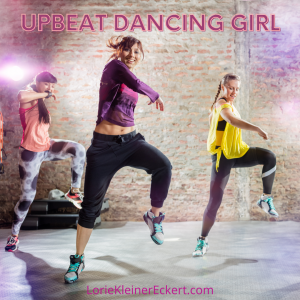 Lots of thoughts are running through my head. Here they are now.

The publisher of a newspaper for which I write asked me to write an upbeat story. Then he gave a suggestion. Maybe I could write about what I am looking forward to doing with the easing of COVID restrictions.

So even though I am still emotionally jangled over the pandemic – and not ready for COVID restrictions to be lifted – I wrote about what I am looking forward to. And I was thrilled! Mission accomplished! Whew! I pulled it off!

But then, a day or so later, I looked over my story. I told what I was looking forward to, but was it upbeat? And what the heck does it mean to be upbeat?

The dictionary provided a definition. It means to be cheerful and optimistic.

But that’s not cheerful and optimistic. I’m such a serious student of life, perhaps those adjectives are Mission Impossible for me.

Looking over my what-I-am-looking-forward-to story, there is a cheerful element I love. It’s a link to a YouTube video of Taylor Swift singing “Shake it Off.” I have watched it repeatedly. It’s so happy and peppy! It makes me want to get up and dance!

It’s like when the hora starts to play at a Jewish wedding. There is an explosion in my soul! I run for the dance floor! I wanna dance with somebody!

Oh! And what memories surround that song!

When my daughter was in high school, there was a dance to which the girls asked the boys. Of course, it was imperative to ask in an original way. Lisa’s friend had a plan. It employed a handful of her girlfriends and help from the school janitor who blasted that Whitney Houston song through the loudspeakers at lunchtime as the girls danced down the circular staircase that accessed the cafeteria.

The moms of all the dancers came to school to see the show. Trust me, we were a lot more delighted than the boy who was the focus of all the hubbub. Ultimately, he picked up his girlfriend and carried her away effectively ending the performance. But, oh man, it was a perfect Richard Gere/Debra Winger/An Officer and a Gentleman moment that made a perfect memory even more perfect!

But then, the combination of Lisa and dancing has always brought me joy.  When she was still small enough to carry, if the song, “At the Hop,” came on the radio, we would hop, hop, hop together when the song did.

And as a teenager washing dishes at the kitchen sink, dancing was part of her gig. It was such a delight to see that I always told her I want her to tap dance on my grave because I want to carry the image with me into eternity.

And speaking of keep-it-forever memories, there was that time I danced with her – and my other two children – at my niece Sarah’s wedding. We carved out a little spot on the dance floor, and shared a song or two. Looking at my three dance partners was breathtaking! How could these adult – and accomplished – human beings be my children? I could have danced all night!

Coincidentally, in an effort to be a new and improved granny post-pandemic, I have been playing with my grandkids more, and in this manner, found a game called Just Dance. One can purchase a game system and the game, or do what I do, just dance along with YouTube videos of others playing the game.

In this manner, my granddaughter Avery and I danced to a song called “Timber.” The song calls for a panda and a person. I’m the panda! We were so proud of ourselves that we performed for the rest of her family, which is how my son Scott and grandson Leo next danced to “Old Town Road.” We recorded the boys dancing, but swore not to show it to anyone, hence no link here. But they were adorable, and afterward, I watched their dance repeatedly.

…Until four days later when Scott was riding his bike and it malfunctioned. This sent him flying over the handlebars, putting a gash in his head, and breaking his collarbone.

That brought my dancing mood to a screeching halt.

For days, I was terrified thinking of all the horrific what-ifs, which I won’t enumerate because I don’t want to give God any ideas. But then within days, Scott had surgery to repair the collarbone with a metal plate and eight bolts. And with those passing days, concussion-type symptoms dissipated. And then physical therapy got scheduled. At that point, I began to see all the what-ifs differently. They were the many ways that things could have been worse.

So, here I am, an honest person, in touch with my feelings, with a positivity born of the fact that it can always be worse. But an upbeat person? I don’t know about that.

As I return to watching that video of my son and grandson dancing, I marvel at the fact that Scott is using his arms like it’s no big deal. Currently, his body doesn’t work that way. But it will again soon God willing. Let’s wait until then to talk about being an upbeat dancing girl. For now, I’m going to focus on being grateful.

If you like this story, you will like other things I have written. Please subscribe to my blog and/or read my new book, Love, Loss, and Moving On. Thank you!