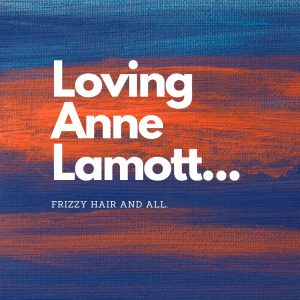 Anne Lamott is a white lady with dreadlocks. The story of her hair has a lot to teach. I will tell you about that next, but first, let me introduce her. She is the author of nineteen books. Seven are novels and the rest are non-fiction, mostly compilations of essays that tell the stories of her life. I own seven of her books, and have read others, clearly making me an Anne fan.

Like most lives, Anne Lamott’s has been an up and down affair. She lost her dad to cancer when she was 25. She suffered with drug and alcohol addiction through her early 30’s. She got clean and sober, became a single mom, and lost her life-long friend to breast cancer in the later part of her 30’s. She lived through her son’s addictions, and saw him get sober – and become a teenage father – by her mid 50’s. And three days after getting Medicare, she got married for the first time.

This sometimes-messy life becomes fodder for her writing. Life lessons abound. With her humorous and irreverent approach to life, her books are a joy to read. Non-readers can follow her on social media after discovering her wisdom here. I have provide her links – and sources for all the quotes I share – here.

Anne Lamott grew up with boys – and even her father’s friends – looking at her nappy hair and asking if she had stuck her fingers in a light socket. This question got old when she was in her 20’s and 30’s. It was intolerable in her 40’s when a stranger at a funeral (!) asked this same question.

Various remedies had various levels of success UNLESS the weather intervened to counteract her “industrial strength mousse” and “space-age antifrizz.” Before long, she devoted “much of [her] prayer life to the desperate hope that there not be any weather.”

This is the point at which she opted for dreadlocks teaching us that when we think “about [our personal issue] more often than about things in the world that matter,” it’s time to fix the problem.

Anne Lamott’s Other Problem When Looking in the Mirror

Anne-isms on Sobriety, Parenthood, and Making it Through Life:

But there is one caveat about Anne:

For people who get nervous about religion, her church life is important to her, so she mentions it, but does not push God on others. In fact, she can be very irreverent like when she wrote, “I thought such awful thoughts that I cannot even say them out loud because they would make Jesus want to drink gin straight out of the cat dish.”

As for me – a Jewish woman – from her earliest books, I have been charmed by the fact that many of her acknowledgement pages include an invitation to join her for services – they start at 11:00 – at St. Andrew Presbyterian Church, Marin City, California. Additionally, there have been intermittent stories about a fellow parishioner, an older woman, who gave Anne baggies full of dimes when she was new to the church, struggling with sobriety, and broke. With beautiful stories like this, of course, Anne Lamott writes about her church life – along with scads of other topics from the sublime to the ridiculous.

Honoring that range, I close with this silly/sage remark from Anne’s son at age seven: “I think I already understand about life: pretty good, some problems.”

If you like this story, you will like other things I have written. Please try my blog and/or my new book, Love, Loss, and Moving On. Thank you!