An Exploration of Men, Marriage, and Motherhood 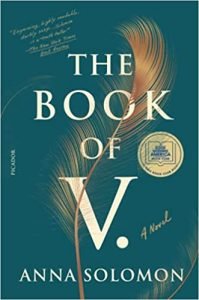 This novel moves back and forth between three stories in vastly different time periods. First, we meet Lily in modern-day Brooklyn, then Vee in Nixon-era Washington DC, and finally, Queens Esther and Vashti in biblical times. Men, marriage, and motherhood are the topics explored in the overlapping stories.

The novel opens with Lily’s rant about the children’s version of the Book of Esther from the Old Testament. Her little daughters love the story. She does not. The author pulls us right in with these lines: “Close the book now. Close it. Look. The story’s simple. Persia, once upon a time. King banishes queen. Queen refuses to come to his party and parade in front of his friends – naked, is what most people think he wanted! – and he sends her away, or has her killed. No one knows. She’s gone. Vashti, this is. Her name’s Vashti. You know this! And then the king gets sad and wants another wife so he calls for all the maidens to come and win his affections…But when it’s time for the beauty pageant, the king chooses the maiden who doesn’t try too hard…Esther. She also happens to be Jewish, though she doesn’t mention that,” to the king who has ordered the death of all the Jews.

Though feminist questions abound in this biblical story, the part that disturbs Lily is that Queen Esther and she have something in common – they are second wives.

Next, we meet Vee, the wife of Senator Alexander Kent of Rhode Island, “who gave no fewer than five parties in one month, displaying his home, his wife, and his good taste in scotch.” In spite of the fact that she is the one with a pedigree and money – daughter of a senator from Massachusetts and granddaughter of a governor of Connecticut – she usually acquiesces to his demands. But guess what? She has something in common with Vashti. At a big party at their home, her husband wants her to strip and dance naked.

And finally, we meet Esther and Vashti. If you are familiar with stories from the Old Testament, you know that there can be as many interpretations as there are scholars. It is interesting to note that the author gives her own interpretation of the Book of Esther. In that it involved magic, it did not appeal to me. Yet, I was impressed that she dared to tell this old story in a such a new way.

In the end, I loved the sections about Lily and Vee but not so much the chapters about Esther and Vashti. However, those chapters made me want to research other interpretations of the Book of Esther online, which was fascinating. I recommend such research to others who want to fully understand the book and appreciate what the author has pulled off with her telling.

If you like this story, you will like other things I have written. Please try my blog and/or my new book, Love, Loss, and Moving On. Thank you!