It Was Love at First Sight, and Then He Was Gone 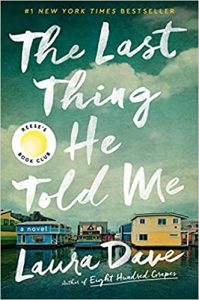 Hannah Hall was thirty-eight when she met Owen Michaels. She had never been married, while he was a widower with a teenage daughter, Bailey. When the story opens, they are a year and a half into their marriage, and they have known each other for just over two years. It is in the novel’s opening pages that a note in Owens’ handwriting is delivered to Hannah’s door. The note says, “Protect her.” Hannah doesn’t exactly understand the note. She tries repeatedly to contact Owen to learn more, but he does not answer his phone.

Later that same day, Hannah picks up Bailey from school. She gets in the car with a duffle bag her father evidently left in her school locker. It contains rolls and rolls of money, hundreds of hundred-dollar bills tied together with string. Bailey reports she started counting the money. Each roll has ten thousand dollars in it, and she stopped her count at sixty rolls. So, that’s six hundred thousand dollars…plus more.

I should mention that just before Bailey got in the car, Hannah heard a news report on NPR about the tech firm Owen works for called The Shop. There was a raid there by the FBI. It was the culmination of a fourteen-month investigation by the SEC into the software start-up company’s business practices. Things are not looking good for Owen, who has clearly disappeared.

Ultimately, Hannah and Bailey begin to look for him and for answers. As would be expected in a mystery, the book has its share of twists and turns but not so many as to be confusing.

Interestingly, it is in the oldest flashback that we learn one of the first things Owen told Hannah: “There is nothing I wouldn’t do for my daughter.” This is the perfect bookend for the last thing her told her: “Protect her.”

Why Bailey needs to be protected is at the core of the story, so I won’t say more. I will confess that as the book got to that core, I was momentarily dismayed. I thought to myself, Oh darn! The author’s not possibly going there, is she?! But indeed, she did “go there,” into an area that I consider to be a quagmire. But then, somehow, magically, she makes it all work. Not only does the author deliver a palatable ending, but a tear jerker as well.

I highly recommend this book. But clear your calendar before you start reading it. You won’t want to put it down.