An Advice Column that Evokes a Visceral Response 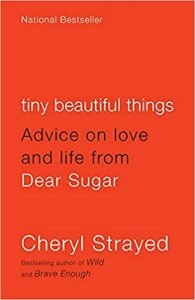 Dear Sugar was the name of an advice column in an online publication called The Rumpus. It was created by Steve Almond who envisioned it to be a different kind of advice column, both irreverent and brutally honest. He imaged that the perfect writer for this column would be “a woman with a troubled past and a slightly reckless tongue.” For the first year of the column, however, Almond wrote it himself. And then he found Cheryl Strayed. If the name sounds familiar, she is the author of the blockbuster memoir, Wild, From Lost to Found on the Pacific Crest Trail. The book was chosen by Oprah for her book club. It was also made into a movie starring Reese Witherspoon.

In the introduction to Tiny Beautiful Things, Steve Almond tells us that advice columnists are supposed to adhere to a code – “focus on the letter writer, dispense the necessary bromides, make it all seem bearable.” But this is not how Cheryl Strayed did things. Instead, she told the stories of her life in order to help the letter writer learn applicable life lessons.

Since the book is a series of letters with wise answers, it reads like a book of short stories. I loved many of the chapters, but will tell about the one that seems most significant to me. It is for any estranged couple raising kids in whatever degree of togetherness or lack thereof. The bottom line is that the parents need to put the child’s welfare first. But read the visceral way Cheryl Strayed imparts this information thanks to the use of personal storytelling.

Here’s the letter in question

It is from a woman who is a new mother. Her child’s father is not in the picture and indeed lives in another state. She asks: “Am I obligated to send pictures and keep him updated about his child since he sends somewhat pitiful emails every couple of months about himself?” She goes on to say that she wants to do what is best for her child even though she wants to kick the baby’s father in the groin.

As part of her response “Sugar,” tells her own story on the topic of fathers. She says her parents were both nineteen when her mom got pregnant. They got married even though they were not in love. Over the next nine years they had three children. In Cheryl Strayed’s words, “Some very hard things happened. I have so many horrible stories about the [six] years with my dad, who was often violent and mean. But those aren’t the stories you need to hear. What you need to hear is how much, as a child, I loved him. My father. My dad. My daddy. The love I had for him was tremendous, irrefutable, bigger than my terror and sorrow…My mother never spoke an ill word about my father to my siblings and me. She had every right to hate him, to turn us against him, but she didn’t…It isn’t fair that she had to be so kind to such an unkind man…She had to be her best self more often than it’s reasonable for any human to be. And you know what’s so never-endingly beautiful to me? She was. She was imperfect. She made mistakes. Bust she was her best self more often than it’s reasonable for any human to be. And that is the gift of my life.”

I want to buy many copies of this book

I want to give a copy to every couple I know who is divorced with kids. What a perfect world it would be if every parent put the welfare of his/her child first.

I want to give a copy to every public speaker and/or essayist I know. If they want their words to be viscerally felt, every chapter in this book provides a lesson in how to use personal stories to make this happen.

But more than that, I want to give a copy to all my friends. Cheryl Strayed’s hard-earned life lessons are well-written gems. I found each chapter to be a tiny beautiful thing.