A New Book from the “Bard of Nantucket” 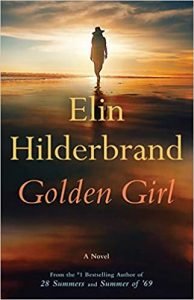 The book opens with a hit and run accident in which Vivi Howe is killed. She is a writer whose thirteen novels are beach reads set on Nantucket. When she gets to the great beyond, she is granted a seventy-five-day viewing window to watch over her still-living loved ones. She is also granted three nudges, which allow her to influence the outcome of situations she witnesses as she watches her family.

The book is jam-packed with characters. We have Vivi’s three children, Willa, Carson, and Leo. They are in various stages of being all grown up. The oldest is married and the youngest is about to go off to college. Of course, they each have romantic partners for us to follow, and Leo also has a dear friend who was practically raised by Vivi. Interestingly, this young person, Cruz, is a suspect in her death. But wait, we aren’t finished with the cast of characters yet. Vivi’s best friend is often in the story, as is Vivi’s ex-husband and the much younger woman for whom he left Vivi. Vivi has a love interest too, well actually, he is her “almost-ex-boyfriend.” And if this is not enough characters to juggle, Willa’s in-laws play a part in the tale. Oh, and let’s not forget Ed Kapenash, the chief of police in Nantucket. He’s the one trying to figure out who hit Vivi and why.

The book is set out in short chapters with alternating points of view.  Thus, the reader gets into the heads of many of the above-mentioned characters as the plot advances. There is also a Greek chorus of sorts, and some chapters are told from “Nantucket’s” point of view. Ultimately, the person who killed Vivi is found, and all of the characters go off into their own brand of happily ever after.

If there is a genre of books called “Beach Read,” this is the epitome of that style. So, if that’s what you are looking for, this is a good one. Give it a try!