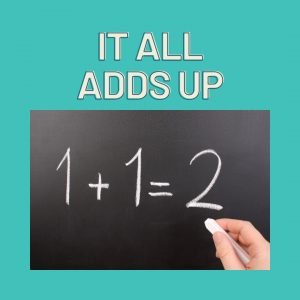 Did you know that comedian, Jay Leno, has a car collection worth over $52 million? The exact number of vehicles fluctuates because he is routinely buying and selling, but according to an article in DuPont Registry Daily from April, 2021, there were 181 cars and 160 motorcycles.

I report this to you not because I want to talk about vehicles or about Jay Leno, but because I want to talk about collecting things. My ultimate goal is to point out an important life lesson – or perhaps it’s an arithmetic lesson – that a little bit plus a little bit adds up to a whole lot. There are fabulous implications to this fact. But before I get to that, let’s talk about the history and motivation behind collecting. Let’s talk about what people collect – including weird collections and gross collections. Let’s hear about a few more celebrities – does Johnny Depp really collect Barbie dolls? And then let’s check in with Sigmund Freud to see what he has to say on this topic.

A note: There is so much information about collecting that I will provide links at the end of the blog for you to read more if interested. Additionally, copyright laws keep me from showing you photos of the collections I mention. The links at the end will take care of that problem too.

The History and Motivation Behind Collecting:

Aristocrats in the 1700s and 1800s are the collectors who gave a good name to the hobby. The room in their homes that showcased their fossils, shells, works of art, books, etc. were symbolic displays of their power and wealth. The first museums in Europe were established to house such collections as they became overgrown.

These early collectors were in it for the prestige. Jay Leno is in it for that reason too – and for the profit. His collection is literally a vehicle for investment. The average Joe collects for the pure enjoyment of it, or to preserve the past. Some collect to expand their social lives as they attend swap meets, garage sales, and antique shops all the while finding like-minded collectors to befriend. And then there are those who collect for the thrill of the hunt.

Sigmund Freud Poo Poos These Motivations and Tells Us It’s All About Poo Instead:

According to NationalPsychologist.com, Freud “postulated that collecting ties back to the time of toilet training…Freud suggested that the loss of control and what went down the toilet was a traumatic occurrence and that, therefore, the collector is trying to gain back not only control but ‘possessions’ that were lost so many years ago.”

For your average stamp or coin collector, this might be a bit overboard. However, when collecting turns into hoarding, perhaps Freud’s opinion bears exploration.

So What Do People Collect?

The most common collections are teddy bears, postcards, coins, matchboxes, stamps, subway tokens, and clocks. Such collectors are so numerous, they have special names. Can you match these names to their collections: arctophilist, deltiologist, numismatist, philumentist, philatelist, vecturist, and horologist? (I will give the answer to this quiz at the end of the story.)

My research also turned up some unusual collections. I’ll leave it to you to decide which are weird and which are gross in this list: belly button fluff, toenail clippings, celebrity hair locks, vintage postcards of early 20th century asylums, vintage paperbacks with “shame” in the title, airline barf bags, toothbrushes, eyebrow hairs, and cat whiskers.

And then there are celebrities and their collections to talk about. A variety of the men – Jerry Seinfeld, Simon Cowell – collect cars, while the women – Mariah Carey, Beyoncé, Kate Moss – collect shoes or purses. Yes, Johnny Depp does collect Barbie Dolls along with celebrity dolls like Elvis, Marilyn Monroe, and Audrey Hepburn. Some of these are rare collector’s items and limited editions. Meanwhile, Leonardo DiCaprio is into action figures, and Rod Stewart loves model trains. On the possibly gross side, Amanda Seyfried collects taxidermized animals and Claudia Schiffer collects insects.

Here it Is, My Collection: 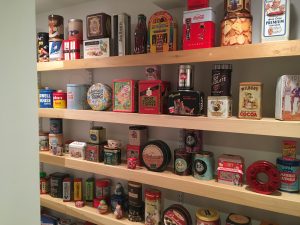 One reason that I am interested in collections is that I have one too – advertising tins. I have approximately 300 on display in my home and another 300 in boxes in the basement. My late boyfriend, Irv, believed that when you collect something, you buy that something every time you bump into one in your daily life. I remember coming home for a church bazaar with two dozen tins! (And what a bargain! The total cost was $12!)

As much as my collection grew during my years with Irv, it does not compare with an 82-year-old woman in Belgium with 60,000 tins. Yvette Dardenne has a museum – comprised of three buildings – in which to house them.

The Small Takeaway from this Story and the Larger One:

There is a Yiddish expression my parents used frequently: “A bissel and a bissel machts a groisen shissel.” In translation it means: a little bit and a little bit makes a big bowlful. This clearly explains how collections are amassed over time.

But my parents used it more broadly than that. If I was struggling to cook for a crowd, they used it. In explaining how to save for retirement, they used it. In showing modesty when they were honored for their many volunteer hours, they used it. It was an all-purpose philosophy that extended to every area of life. Want to be good at the piano? Practice a little bit each day. Want to be well-read? One book at a time is the prescription. Want to be a master quilter? After making a few dozen, you’ll be on your way. And on it goes.

One by one by one, it all adds up over time. It’s guaranteed. Basic arithmetic says so.

Answer to the quiz:

I did not mix up the answers. Thus, an arctophilist collects teddy bears, a deltiologist collects postcards, a numismatist collects coins, etc.

Here are the links I promised: