A Nevada Dude Ranch Catering to the Divorce Trade 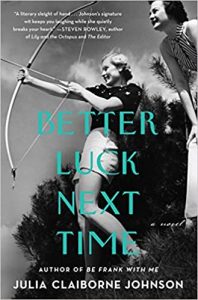 In the 1930s, Reno, Nevada was the “divorce capital of the world.” This book is a piece of historical fiction and it explains things this way: Divorce was easy to come by for residents of Reno; it only took a six week stay in Nevada to establish residency; and so, facilities popped up to house the women who flocked to the state for divorce. The derivation of the book’s title is explained in the acknowledgements where we learn about a real-life judge named George A. Bartlett who finalized each divorce by pounding his gavel and declaring, “Better luck next time.”

As the book opens, it is 1988 and someone – we don’t learn who until the end – is interviewing Dr. Howard Stovall Bennett III. “Ward” is seventy-five years old. Fifty years earlier, in 1938, he was a ranch hand at the Flying Leap Dude Ranch, which catered to the divorce trade. The interviewer has brought a photo along and asks him to tell what he knows about those pictured. It was customary for each cohort of soon-to-be divorcees to have a group picture taken, and indeed, Ward remembers this group well since he left the ranch just as this group finished their stay.

To set the mood, please know that the ranch was designed by a Hollywood set designer to give it as much rustic charm as possible, including a stagecoach which the staff used to pick up arriving guests.

Though we ultimately learn about all the ladies and the staff in the photo, there are two women who become the main characters. Nina is a six-foot-tall aviatrix who flies herself to Reno for her third divorce. She is loved by all the staff though she is a bit on the wild side. Emily is a newbie, looking for her first divorce because her husband has cheated on her repeatedly. She drove herself to Reno from San Francisco in her Pierce-Arrow, a vehicle with cashmere upholstery. She aches not just because she is in the throes of divorce, but also because she is away from her teenage daughter, Portia, who remained at home in California.

In their six weeks of togetherness, Nina and Emily become close friends. Though the ranch hands are not supposed to fraternize with the guests, Ward gets close with them too. For this to happen, Sam – the other ranch hand – turns a blind eye, while the ranch’s owners – Margaret and Max – are too busy to see.

By the end of those six weeks in 1938, the reader feels close to all of these characters and roots for their happiness. It’s great, therefore, that Ward has looked into their whereabouts as of 1988 and can report the news to that mysterious person who is interviewing him.

Though Ward has narrated the entire story, it is the mysterious interviewer who has the last word. He/she shares inside information on the folks in the photo that puts a rosy glow on the story as Ward knew it and gives the reader a heartwarming ending.