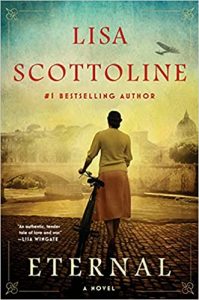 The novel opens with a brief prologue dated 1957. In it, Elisabetta decides it is time to let go of her long-held secret. It is time to tell her thirteen-year-old son who his father is. From there, the author jumps into Elisabetta’s life story, and the reader is transported back in time to 1937. Here we see her in Rome, Italy at the age of fifteen. She has two close friends, Sandro and Marco. From the get go, the two boys are competing for Elisabetta’s love.

As the dates would imply, though, two other “guys” are going to play a part in this historical novel – Mussolini and Hitler. When I tell you that Sandro is Jewish and that his family lives in the Jewish Ghetto in Rome, you will have a clue where this story is going.

Frankly, I did not know anything about Italy in this time period, so it was interesting to read about those who favored and opposed fascism under Mussolini. It was harder to read about the Race Laws enacted under his rule. Starting in 1938, these laws methodically stripped the Jews of their rights such as the right to teach or be a student in an Italian school. It was harder still to see what happened as Hitler came to power. Especially difficult, and filling many chapters in the book, was the part about the “rastrellamento” where all Jews were rounded up at gunpoint on October 16, 1943. Their ultimate destination was Auschwitz.

Scottoline did a great job of showing the life of the Jews as their circumstances became more and more constricted between 1938 and 1943. Indeed, her tale reminded me of my visit to Yad Vashem, The World Holocaust Remembrance Center in Jerusalem. The walls of the exhibit halls seemed to get narrower and narrower as options for the Jews did the same. It was amazing that her writing evoked that memory.

Another beautiful thing about the book is the way that Marco’s Catholic family courageously tries to help Sandro’s family. According to the facts Scottoline presents in the story, there were a lot of courageous Italians acting similarly. She says, “About ten thousand of Rome’s twelve thousand Jews had survived [the war] by hiding in the Vatican, monasteries, convents, and homes.” Sadly, of the twelve hundred men, women, and children who had been rounded up during the rastrellamento, she tells us that only sixteen survived.

Another important Holocaust book, written by a survivor is All but My Life by Gerda Weissmann Klein. I tell you about it in this story: Should I Bury My Shoes?