Forbidden Love: An Israeli Woman and A Palestinian Man 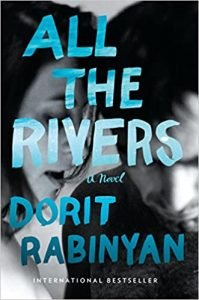 Liat is an Israeli student in the process of earning a master’s degree at Tel Aviv University. Thanks to a Fulbright fellowship, she is translating research papers in New York for a six-month period in 2003. There she meets a friend of a friend, Hilmi Nasser. He is a Palestinian artist. He earned his BFA in Baghdad, and then came to New York in 1999 on an artist’s visa. When they meet, it might not have been love at first sight for her, but it was certainly intrigue-ment at first sight.

As they get to know each other, the obstacles that should keep them apart readily jump out from the page. For instance, he realizes she might have been in the army at the same time he was in prison. He says there were a few women soldiers there, so they might have met then. She is shocked!  What did he do to be imprisoned? She thinks to herself, “And just as he probably imagined me as a soldier in IDF uniform, armed with a rifle, I see his face looking out from the window of a bus full of security prisoners. I see him handcuffed and blindfolded with a group of other men.”

Here was the reality instead: During her stint in the army, she did office work in a suburb of Tel Aviv. As for his imprisonment, he was fifteen-years-old and arrested for painting graffiti on a wall in Hebron. As he explains, “It was illegal to paint the Palestinian flag or anything in the flag’s colors. Red, green, white, and black. You weren’t allowed to use those colors. Even if you were just painting something innocent, like a watermelon, you could get arrested.”

Another time, when she goes to the bathroom in a bar, and sees a sign on the stall that says, “Occupied,” she wonders what he would think and feel to see it.

When even single words are so loaded, how is a relationship going to work out between them? And even if it worked in New York City, there was no taking this sort of love back to Israel.

And indeed, as Liat’s fellowship ends, and she returns home, I couldn’t wait to see how the author would resolve the situation. Sadly, I was let down by where she took the plot. However, in researching the book, I learned that the author actually lived this experience and that the ending of the book is the ending of the real love affair.

It is interesting to note that this book was banned from classrooms in Israel by the Minister of Education for possibly encouraging intermarriage. Of course, this ban made book sales double.

It is also interesting to note this quote from the New York Times review of the book. The author says, “[Liat] takes [Hilmi] out of the multitude and acknowledges his humanity, her humanity. He’s not the Palestinian people. He’s one person.” I know it’s naïve, but that sounds like a path to peace to me. Perhaps we should bring this book into the classroom after all.

Share this on Social Media
Previous Post: « 30 Reasons to Be Grateful at My Granddaughter’s Soccer Game
Next Post: The Mystery of Mrs. Christie by Marie Benedict »