In 1926, Agatha Christie Disappeared for Eleven Days. Where Did She Go? 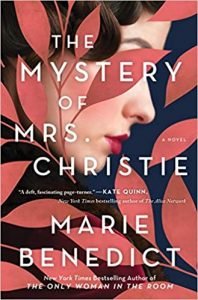 Evidently, famed author, Agatha Christie, disappeared for an eleven-day period in 1926 when she was thirty-six years old. Even after she was found, the absence was never fully explained. Was she suffering from amnesia? Was it a publicity stunt? What was the deal?

Marie Benedict tries to answer this question in The Mystery of Mrs. Christie. If you do not know the author, she writes historical fiction, taking the bare bones of a true story and adding a little meat to them. I have read her book, The Only Woman in the Room, about Hedy Lamarr. I have not read her other books, but they include The Other Einstein about Albert Einstein’s wife, and Lady Clementine, about Winston Churchill’s wife.

The Mystery of Mrs. Christie opens with a letter presumably from Agatha to her husband, Archie. Its tone is mysterious, perhaps threatening. “How do you want this story to end? It seems to me that there are two paths from which you can choose, the first involving a softer landing than the second, though neither are without bumps and bruises, of course. The small injuries are simply a necessary consequence of this entire exercise, as I’m sure you must understand by now…Read on and follow my instructions closely if you wish the safety of the first path and the security of its conclusion.”

The book then offers alternating chapters. The first set of chapters are called “The Manuscript” and little by little they tell the story of Agatha and Archie’s relationship from first meeting in 1912 through the disappearance. The second set of chapters go day by day through the disappearance from Archie’s point of view. These chapters pit him against the police and the press. Among other things, they know he received a letter from her, why can’t he produce it?

According to an article in The New York Times, this episode in history is still of great interest even though it is now ninety-five years later. The article gives a day by day chronology of the investigation and even shows newspaper clippings from the time. It also mentions a biography by Laura Thompson, Agatha Christie: A Mysterious Life. And then there is the 1977 novel by Kathleen Tynan, Agatha: A Novel of Mystery, which was turned into a film starring Vanessa Redgrave. And it also mentions a British made-for-TV film about the disappearance made in 2018, Agatha and the Truth of Murder.

As for Marie Benedict’s book, ultimately, it reads like a mystery Agatha Christie could have written and is an easy way to get involved in the case for readers who want to try their hand at solving the mystery.