Solve the Mystery: Who Wrote The History of Love? 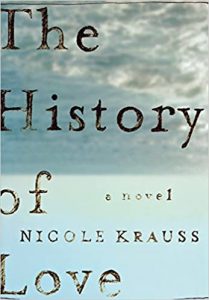 This book is wonderful, but it is not a book for the beach. Its plot is complex and a bit convoluted. Read it like you would a mystery, searching for clues. In return for a close reading, you will be rewarded with the full emotional impact of the ending.

There are seemingly several stories going on, though they all converge by the book’s end. We start with a lonely old man, a holocaust survivor, Leo Gursky. He is so lonely that he volunteers to be a nude model at an art class just so people will look at him.

He is a man who fell in love with a girl when he was growing up in Poland. As young adults, they were separated when she escaped to America – to New York – before the war. He made it there after the war and found her again, only to learn she had married someone else. Leo’s letters had not found their way to her, and she thought he was dead. Oh, and by the way, she arrived in America pregnant with Leo’s child.

Leo is a writer. After his love left for America, he filled pages with her name. A little later in the book, we learn more about that manuscript, which was written in Yiddish. He has a current work-in-progress that is 301 pages long.

In the book’s second section, we encounter a fifteen-year-old girl named Alma Singer. She lives with her mother and younger brother in New York City. The dad/husband died of cancer when Alma was seven.

There is a book of great significance to Alma’s family. It is a book Alma’s dad gave her mom in the early days of their relationship. It is called The History of Love and is written in Spanish. The love interest in the book is named Alma, and that is how Alma Singer got her name.

Currently, the mom, who works as a translator, is asked by a mysterious man, Jacob Marcus, to translate a book from Spanish to English. In his letter requesting the translation, he identifies the book by saying it is by “a little-known writer, Zvi Litvinoff, who escaped from Poland to Chile in 1941, and whose single published work, written in Spanish, is called The History of Love.”

He also explains why the book is important to him: “A very long time ago someone once read to me as I was falling asleep a few pages from a book called The History of Love, and all these years later I haven’t forgotten that night, or those pages.”

In the books’ third story, we learn that “almost everything known about Zvi Litvinoff comes from the introduction his wife, Rosa, wrote in the volume of The History of Love reissued a few years after his death.” Interestingly, all the character names in the book are Spanish except for one Polish name, Alma Mereminski.

When we eventually learn that Leo’s childhood and lifelong love is named Alma, you can see where this story is going. It is an intricate mystery. Who wrote The History of Love? With all these Yiddish-speaking Polish people, why is it written in Spanish? Who the heck is Zvi? And who is Jacob Marcus? And who read the book to him? And could we possibly do something to assuage Leo’s loneliness? All questions are answered by the book’s end thanks to the detective work and compassion of young Alma.

I am not alone in loving this book. It was the winner of the Book of the Month Club’s Best Literary Fiction Award in 2005. It was also the winner of the Edward Lewis Wallant Award for Jewish Fiction. Various publications – from the Washington Post to Newsday – had it on their Best Books of the Year lists. And Amazon named it the #1 Novel of the Year.