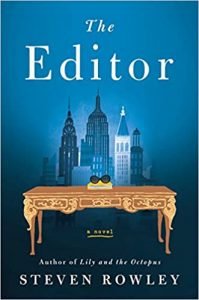 James Smale is a novelist living in New York City in 1992. He is trying to find a publisher for his manuscript, The Quarantine. His agent’s ditzy secretary sends him off to a meeting with an interested editor giving him little information except that he is to ask for Lisa. Of course, the ditzy gal is wrong. Lila is the woman he’s supposed to see. But as it turns out, Lila is not the interested agent. She is the interested agent’s assistant who set up the meeting, who walked him through the publishing house (a publishing house!) to a conference room, and left him there to meet some unnamed female editor. He’s a little disoriented and becomes even more so when the interested editor walks in and is none other than Jackie Kennedy Onassis.

I should add that on the walk to the conference room, Lila had moved very quickly! Though she offered him water, he couldn’t imagine walking fast and holding a beverage without spilling it, so he declined. However, when faced with such celebrity, words tumbled from his mouth. “This is a lot to take in.” he says. “Maybe I should have accepted that glass of water.” And so it is that the former first lady of the United States goes off to fetch his drink. What does he do at this turn of events? Ten jumping jacks in the corner of the room!

And so, you can see that there is a lot of room for humor in this book and a lot of room to explore the fact that Jackie Kennedy Onassis worked in publishing in New York in the ‘90s. Through James’ eyes we see what it might have been like to be one of her authors. We also see why she would be drawn to his book, an autobiographical novel.

The manuscript opens with Russell – James’ name in the book – attending his father’s funeral and deciding he needs to go into quarantine with his mother “until there were no more secrets, until they knew each other as well as two people could.” In this way, he hopes to “make sense of the gunshot that took half his father’s face.”

Jackie is drawn to the book – and even identifies with – the way James wrote the mother. Though she loves the book, she pushes him for a more authentic ending. With her continual prodding, he sets off to accomplish this task. Visiting Jackie’s homes in New York and Martha’s Vineyard is part of the process.

While I enjoyed the book – especially the humor – I think I am equally drawn to two non-fiction books the author mentions in his acknowledgment. Both are about Jackie Onassis’ time in publishing. The first is called Reading Jackie: Her Autobiography in Books by William Kuhn. The other is called Jackie as Editor: The Literary Life of Jacqueline Kennedy Onassis by Greg Lawrence.

The author advances the idea that the books Jackie chose to publish show a lot about her and form their own sort of biography. With that in mind, I loved that the author chose to make motherhood a large part of his book and therefore a large part of her presumed identity.

Like many, I always have been intrigued by Jackie Kennedy Onassis. This imagined part of her life adds to the allure.