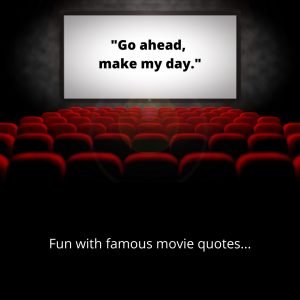 In 2005, the American Film Institute released a list of famous movie quotes as they celebrated their 100th anniversary. Here are the top five:

As I look at the list, I think of it as a possible party game, with this goal in mind: “Getting to know you, getting to know all about you.” Oh wait, that’s a song lyric not a movie quote, but surely you get my gist. Hearing why a famous quote resonates with someone tells a lot about that person.

Modeling the game for you, here are five quotes from the list that show you my essence.

I love this quote because I have fond memories of a Star Wars party my daughter gave for the family on May the fourth (get it?) of a year when her sons were young. My ex-husband attended dressed as Darth Vader, scaring the little kids to death. He’d take off the mask and the kids would be fine; he’d put the mask back on and the kids jumped into the arms of the nearest adult. Jabba the Hot Dogs, Princess Lay’s Potato Chips, and Yoda Soda added to the fun.

Oh my! Isn’t this the crux of most interpersonal problems? My late friend, Big Irv, and I almost broke up before our first date when he told me he would call “in the afternoon” to tell me where and when to meet. I thought this meant he’d call by 5:00, and he thought it meant he would call by 7:00. Many would agree that he stood me up when 5:00 came and went without a call.

Instead, what we had here was a failure to communicate. It sounded like we were speaking English to each other, but it was not the same English. To make matters worse, we were speaking without the aid of an interpreter. I find it helpful to remember this in all communication.

Talk about failure to communicate! Being able to say I’m sorry is a major part of any relationship. It’s right up there with saying please and thank you and with always telling the truth.

I am not alone in finding this quote ludicrous. A story from Infoplease tells us that in Love Story, Ali McGraw delivers the quote to Ryan O’Neal. Two years later he will hear the line again in the film What’s Up Doc. In this second movie, Barbra Streisand says it to his character and he responds, “That’s the dumbest thing I’ve ever heard.”

I find anger to be a heavy burden. The older I get, the less willing I am to carry the load.

There is a movie with Bette Midler and Woody Allen that illustrates my sentiment. It’s called Scenes from a Mall. In it, Midler and Allen are a married couple having a major fight as they stroll the mall. Early on, they buy a surfboard, and then spend the rest of the movie schlepping it around. The unwieldy surfboard was perfect symbolism for the load of anger they were carrying and a perfect reminder to put the load down!

A couple of years ago, I created a social media post that shows home plate in a baseball game. The batter is mid-swing, the catcher and umpire are leaning in awaiting their possible moment in the play. The caption reads, “In baseball as in life, all the important things happen at home.” Indeed, there is no place like home!

It’s OK to use quotes not on the AFI list:

Should you play this getting-to-know-you game with friends, be sure to allow them to share favorite quotes that did not make the AFI list. Here is an all-time favorite of mine from When Harry Met Sally, 1989. It’s not succinct, but it certainly speaks to who I am:

“I’d like the pie heated, and I don’t want the ice cream on top; I want it on the side. And I’d like strawberry instead of vanilla if you have it. If not, then no ice cream, just whipped cream, but only if it’s real. If it’s out of a can, then nothing.”

So there you have it, I am many things including a girl who wants what she wants. At the moment, I want you to share a favorite movie quote with me in the comment section below. As Clint Eastwood would say in his 1983 film Sudden Impact, “Go ahead, make my day.”